1. Which of the following terms is being used to denote the species pf animals of a particular region or period?
(a) Fauna
(b) Animals
(c) Flora
(d) All of these.
Answer:
(a) Fauna

5. How many biosphere reserves have been set up by the government of India?
(a) Ten
(b) Twelve
(c) Five
(d) Fourteen.
Answer:
(d) Fourteen.

Question 1.
What are the three forms of natural vegetation?
Answer:

Question 2.
How many countries of the world having mega bio-diversity?
Answer:
12 countries.

Question 3.
What place does India hold in the world in plant diversity?
Answer:
Tenth.

Question 4.
What place does India hold in Asia in plant diversity?
Fourth.

Question 5.
Distinguish between indigenous species and exotic species.
Answer:
The natural vegetation, which are purely Indian, are known as endemic or indigenous species, but those which have come from outside India are termed as exotic plants.

Question 6.
How does land affect the natural vegetation?
Answer:
Land affects the natural vegetation directly and indirectly. The fertile plain level is generally devoted to agriculture. The undulating and rough terrains are areas where grassland and woodlands develop and give shelter to a variety of wild life.

Question 8.
How does precipitation affect the vegetation?
Answer:
In India, almost the entire rainfall is received by the advancing south-west monsoon (June to September) and retreating north-east monsoons. Areas of heavy rainfall have denser vegetation as compared to other areas of less rainfall.

Question 9.
Which type of forests found in areas having more than 200 cm of rainfall?
Answer:
Tropical evergreen forests.

Question 11.
Which are the most widespread forests of India?
OR
Which forests are also called monsoon forests?
Answer:
Tropical deciduous forests.

Question 12.
How are the tropical deciduous forests divided on the basis of availability of water?
Answer:

Question 14.
Which are the important trees of dry deciduous forests?
Answer:
Teak, Sal, Peepal and Neem.

Question 16.
In what amount of rainfall the thorn forests are found?
Answer:
Less than 70 cm of rainfall.

Question 17.
In which areas of India, the scrubs are found?
Answer:
In the north-western part of the country including semi-arid areas of Gujarat, Rajasthan, Madhya Pradesh, Chhattisgarh, Uttar Pradesh and Haryana.

Question 18.
What are the main plant species of the thorny forests?
Answer:
Acacias, palms, euphorbias and cacti.

Question 19.
State any two characteristics of the thorny trees and scrubs.

Question 20.
What type of trees are found between the height of 1500 metres and 3000 metres?
Answer:
Coniferous trees.

Question 23.
By which nomadic tribes, the Alpine grasslands are used?
Answer:
The Gujjars and the Bakarwals.

Question 24.
Where does the mangrove vegetation found in India?
Answer:
Mangrove forests are found in the deltas of the Ganga, the Mahanadi, the Krishna, the Godavari and the Kaveri.

Question 27.
In which state is Gir forest located?
Answer:
Gir forest is located in Gujarat state of India.

Question 28.
How many plants have been described in Ayurveda?
Answer:
About 2000 plants.

Question 31.
Where are the one-horned rhinoceros found in India?
Answer:
In swampy and marshy lands of Assam and West Bengal.

Question 32.
In which place of India wild asses are found?
Answer:
Arid areas of Rann of Kachchh.

Question 33.
Name the only country in the world that has both tigers and lion.
Answer:
India.

Question 34.
When was the Wildlife Protection Act of India implemented?
Answer:
In 1972.

Question 35.
Name any four biosphere reserves in India where wildlife is protected.
Answer:

Question 36.
In which season, the Siberian crane comes in India?
Answer:
During the winter season.

Question 38.
Write the names of any two wildlife sanctuaries.
Answer:

Question 39.
How do the human beings influence the ecology of a region?
Answer:
Human beings utilise the vegetation and wildlife. The greed of man leads to exploitation of these resources. They insensibly cut the trees and kill the animals, creating ecological imbalance. As a result, some of the plants and animals have reached the verge of extinction.

Question 40.
Write any three developmental projects introduced by government to protect the endangered species of India.

Question 2.
How does the land have an impact on flora and fauna?
Answer:
Land affects the natural vegetation directly and indirectly. The nature of the land i.e., plain, hilly or a plateau, determines the kind of vegetation which will grow in it. Fertile lands are used for growing crops, vegetables and fruits.
Undulating and rough surfaces generally develop either into grasslands and woodlands (forests) and give shelter to a variety of wildlife.

Question 3.
How does the soil have an impact on flora and fauna? Explain with examples.
Answer:
The soils also vary from place to place. Different types of soils provide different types of vegetation. For example, deltaic or alluvial soil at a river delta near the sea will sustain mangrove forests, while slopes of hills have conical trees. The sandy soils of the desert support cactus and thorny bushes.

Question 4.
How does the temperature have an impact on flora and fauna?
Answer:
The character and extent of vegetation are mainly determined by temperature along- with humidity in the air. As the climate gets colder, either by increase in altitude (above 915 metres) or by moving away from the equator, the vegetation will change from tropical to sub-tropical, temperate and then alpine. For example, on the slope of the Himalayas and hills of the Peninsula, the fall in temperature affects the type of vegetation and its growth.

Question 8.
Why is it necessary to conserve our natural resources of forests and wildlife?
Answer:
The natural resources are a common heritage which we have inherited from our forefathers, and in turn, we will pass them over to our future generations. Conservation does not mean that we should not use the natural resources, but it means that we should use them wisely. All the plants and animals in a given area are so closely interlinked and interdependent, that they cannot survive without each other.

The large-scale poaching (killing) of wild animals, residing in the forests by man is a serious threat to the survival of many animal and bird species. This also disturbs the food chains in which these animals occur, resulting in undesirable consequences for the whole ecosystem. Thus to avoid these consequences, special efforts of their conservation are required.

3. Precipitation:
In India, almost the entire rainfall is brought in by the advancing south-west monsoon (June to September) and retreating north-east monsoon. Area of heavy rainfall have more dense vegetation and fauna as compared to other areas of less rainfall.

The elephants are the most magestic animals among the mammals. As they prefer hot wet forests, so they are found in the dense rainy forests of Assam in the north-east and in Kerala and Karnataka in the south. Camels are found mainly in hot and arid Thar Desert of Rajasthan. Wild asses dominate the arid areas of Rann of Kachchh One-homed rhinoceros also fall in the category of mammals.

They live in swampy and marshy land of Assam and West Bengal. The other animals included in the category of mammals are the Indian bison, Indian buffalo, nilgai (blue bull), chausingha (four-homed antelope), black buck, gazel and deer.

1. Animals of prey:
Among the animals of prey, Indian lion and tiger are remarkable. Lion’s natural habitat is confined to the Gir forests of Saurashtra in Gujarat. The famous Bengal tiger has its natural habitat in the Sunderban in the tidal forests occupying the edge of the Ganga delta. The other animals belonging to cat family are leopards, clouded leopards and snow leopards.

2. Animals of the Himalayan Regions:
Snow leopards, sheep, mountain goats, the ibex, the shrew bear and the red panda are the important animals of the Himalayas. Ladakh’s freezing high altitudes are home to yak, the shaggy horned wild ox, the Tibetan antelope, the bharal (blue sheep), wild sheep and the kiang (Tibetan wild ass). .

3. Monkeys:
Indian forests are homes of several species of monkeys. The most famous is the langur.

4. Birds:
India has a rich variety of beautiful and colourful birds. They include pheasants, geese, ducks, mynahs, parakeets, pigeons, cranes, hombills and sun birds. Most bird species inhabit forests, but some have their natural habitats in swamps and wet lands.

5. Water animals:
In the rivers, lakes and coastal areas, turtles, crocodiles and gharials are found.

Question 8.
What steps have been taken by the government of India to protect the flora and fauna of the country ?
Answer:
Flora and fauna are essential for the survival of human beings and to maintain the ecological balance. Due to excessive exploitation of the plants and animal resources by human beings some of them are on the verge of extinction and some have already become extinct.

To stop the indiscriminate destruction of flora and fauna, the following steps have been taken by the government of India :
1. Eighteen biosphere reserves have been establish in the country to protect flora and fauna. Four out of these, the Sundarbans in the West Bengal, Nanda Devi in Uttarakhand, the Gulf of Mannar in Tamil Nadu, the Nilgiris (Kerala, Karnataka and Tamil Nadu) have been included in the World Network of Biosphere Reserves.

2. Financial and technical assistance is provided to various botanical gardens by the government since 1992.

3. 104 National Parks, 543 Wildlife Sanctuaries and Zoological Gardens have been established to take care of this natural heritage. 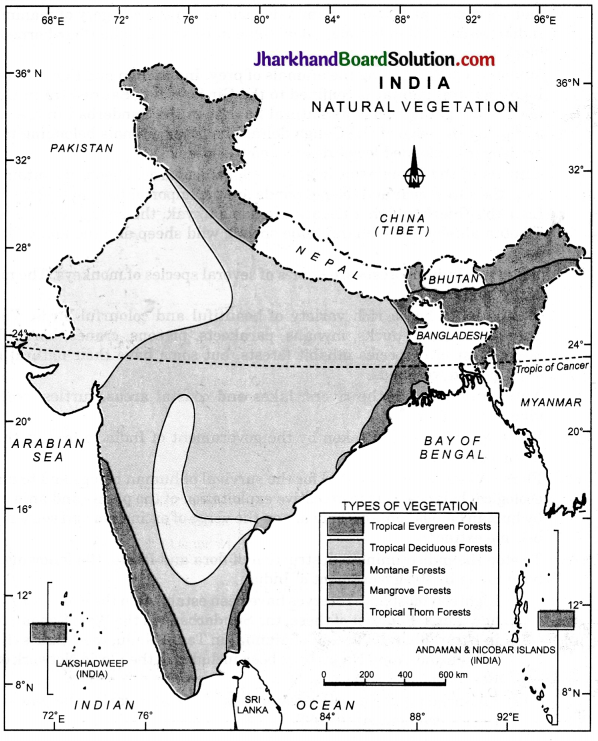