Question 1.
The following table 1.1 shows the land under cultivation in India in units of million hectares. Plot this on the graph provided. What does the graph show? Discuss in class.
Table 1.1 : Cultivated Area over the Years Answer:
Information about crops grown in our region is given below.

Question 3.
What is the working capital required by the farmer using modern farming methods?
Answer:
Some money is always required during production to make payments and, buy other necessary items, such as; seeds, chemical fertilizers, pesticides etc. Raw materials and money in hand are called working capital.

Fig. Shade the land cultivated by the small farmers

For example, in the story of village Palampur, Gobind, a farmer, had 2.25 hectares land in 1960. After his death, this land was divided among his three sons. Each one now has a plot of land that is only 0.75 hectare in size.

Question 3.
The distribution of farmers in India and the amount of land they cultivate is given in the following Graph 1.1. Discuss in the classroom. 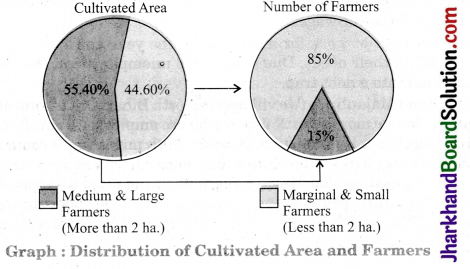 Graph: Distribution of Cultivated Area and Farmers
Answer:
The given graph shows that:

Question 2.
Gosaipur and Majauli are two villages in North Bihar. Out of total of850 households in the two villages, there are more than 250 men who are employed in rural Punjab and Haryana or in Delhi, Mumbai, Surat, Hyderabad or Nagpur. Such migration is common in most villages across India. Why do people migrate? Can you describe (based on your imagination) the work that the migrants of Gosaipur and Majauli might do at the place of destination.
Answer:
People migrate in search of employment or better job opportunities. They do not find regular jobs in the village which causes chronic poverty, leading to starvation. In this case, they are forced to migrate in other cities. I think the migrants of Gosaipur and Majauli might do the following works at the place of destination:

Question 1.
Let us take three farmers. Each has grown wheat on his field though the production is different (see Column 2). The consumption of wheat by each farmer family is the same (Column 3). The whole of surplus wheat this year is used as capital for next year’s production. Also suppose, production is twice the capital used in production. Complete the tables.
Farmer 1

Question 2.
Who provides the labour in this case?
Answer:
In this case, generally, the members of the family provide the labour.

Question 7.
Why didn’t someone start a computer centre earlier? Discuss the possible reasons.
Answer:
No one had started a computer centre in the village earlier because the awareness of the village people about computers was less and none of the students went to the town to attend the college.

During your field visit talk to some farmers of your region. Find out:

Question 1.
What kind of farming methods – modern or traditional or mixed – do the farmers use? Write a note.
Answer:
The farmers of our region use mixed farming method. They plough their fields using bullock. They use tubewells and fountain method for irrigation. They use cow-dung manure and chemical fertilizers in their fields. Pesticides are not used. Crop-cutting is done by traditional method.

But these may not be retained in the soil for long. They may escape from the soil and pollute ground water, rivers and lakes. These also kill useful bacteria and other micro-organisms in the soil. The continuous use of soil makes it less fertile than ever and all this leads to degradation of soil health.

They belong to either landless families or small farmers They are paid low wages and lead a difficult life. In contrast to labour, land is a scarce factor of production. Cultivated land area is limited Moreover, even the existing land is distributed unequally among the people engaged in farming.

There are large number of small farmers who cultivate small plots of land and live in conditions not much better than the landless farm labourer. To make the maximum use of the existing land, farmers use modern and new techniques Both these have led to increase in production of crops.

Modern farming methods require a great deal of money. Small farmers usually need to borrow money to arrange for the capital, and are put to great distress to repay the loan. Therefore, capital too is a scarce factor of production, particularly for the small farmers.

Though both land and capital are scarce, there is a basic difference between the two factors of production. Land is a natural resource, whereas capital is man-made. It is possible to increase capital, whereas land is fixed. Therefore, it is very important that we take good care of land and other natural resources used in farming.

Question 1.
Every village in India is surveyed once in ten years during the census and some of the details are presented in the following format. Fill up the following based on information on Palampur.
(a) Location:
(b) Total Area of The Village:
(c) Land USE (in hectares):

Answer:
(a) Location: A small village well-connected with Raiganj, 3kms from Palampur.
(b) Total Area of The Village: 226 hectares.
(c) Land USE (in hectares):

Question 5.
Construct a table on the distribution of land among the 450 families of Palampur.
Answer:

Question 7.
In your region, talk to two labourers. Choose either farm labourers or labourers working at construction sites. What wages do they get? Are they paid in cash or kind? Do they get work regularly? Are they in debt?
Answer:
I talked to two farm labourers Ram Prasad and Sanchi Lai. Both work on daily wages in my region. Their details are as follows:

Question 9.
Describe the work of a farmer with 1 hectare of land.
Answer:
A farmer who has a plot of 1 hectare has to face many problems. Cultivation of such a plot doesn’t bring adequate income to meet the requirements of his family. So, he has to work on the fields of some large farmer as a labourer after working on his field.

On the other hand, small farmers have little surplus because their total production is small and from this a substantial share is kept for fulfilling their own family needs. So, most of the small farmers have to borrow money to arrange for the capital. The rate of interest on such loans is very high. They are put to great distress to repay the loan.

Question 12.
Talk to some old residents in your region and write a short report on the changes in irrigation and changes in production methods during the last 30 years (optional).
Answer:
I talked some old farmers in my region and came to know that the following changes in irrigation and production methods have taken place in the last 30 years:
1. Changes in Irrigation Method:
30 years back, irrigation was dependent on rains, canals, wells etc. Persian wheels were used by farmers to draw water from the wells and irrigate small fields. But, now-a-days, irrigation is done using tubewells, pump sets etc.

2. Change in Production Method:
Earlier, the farming was done using traditional methods. Farmers used to plough their fields manually or with the the help of bullocks, but with the advancements in technology, ploughing, harvesting etc. works have become easier with the use of machinery like tractors, threshers etc. Production methods has changed significantly under modern farming methods. The farmers make use of HYV seeds, pesticides chemical fertilisers, modern irrigation facilities etc.