Question 7.
Which religion did the new constitution stipulate that the state of Sri Lanka shall protect and foster?
(a) Buddhism
(b) Islam
(c) Hinduism
(d) Christianity
Answer:
(a) Buddhism

Question 9.
Constitution of which country prescribes that the number of Dutch and French-speaking ministers shall be equal in the central government?
(a) England
(b) Sri Lanka
(c) India
(d) Belgium
Answer:
(d) Belgium

Question 10.
In which country are the state governments not subordinate to the Central government?
(a) Belgium
(b) Sri Lanka
(c) Both Sri Lanka and Belgium
(d) None of the above
Answer:
(a) Belgium

Question 1.
What is the meaning of the term ‘ethnic’?
Answer:
The term ‘ethnic’ is a social division based on shared culture. People belonging to the same ethnic group believe in their common descent because of similarities of physical type or of culture or both. They need not always have the same religion or nationality.

Question 4.
What is majoritarianism?
Answer:
Majoritarianism is a belief that the majority community should be able to rule a country in whichever way it wants, by disregarding the wishes and needs of the minority.

Question 8.
What is the meaning of power sharing?
Answer:
Sharing of power by various groups in the society and levels of the government for the smooth functioning of the nation is known as power sharing. 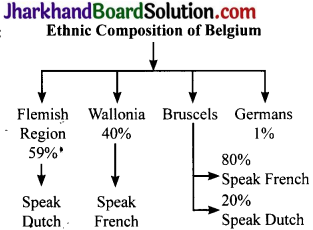 The ethnic composition of Belgium is very complex. Of the country’s total population, 59 per cent lives in the Flemish region and speaks Dutch language. Another 40 per cent people living in the Wallonia region and speak Belgians speak German. In the capital city Brussels, 80 per cent speak French while 20 per cent are Dutch-speaking. 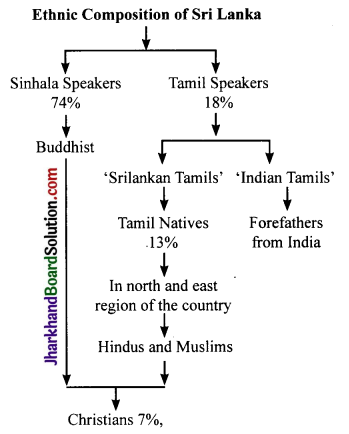 Sri Lanka has a diverse population. The major social groups are the Sinhala
speakers (74 per cent) and the Tamil speakers (18 per cent). Among Tamils there are two sub-groups. Tamil natives of the country are called ‘Sri Lankan. Tamils’ (13 per cent). The rest, whose forefathers came from India as plantation workers during colonial period, are called ‘Indian Tamils’. Sri Lankan Tamils are concentrated in the north and east of the country. Most of the Sinhala-speaking people are Buddhists, while most of the Tamils are Hindus or Muslims. There are about 7 per cent Christians, who are both Tamil and Sinhala.

Question 4.
How was majoritarianism established in Sri Lanka?
Answer:
When Sri Lanka emerged as an independent country in 1948, the leaders of the Sinhala community sought to secure dominance over government by virtue of their community. The democratically elected government adopted a series of. majoritarian measures to establish Sinhala supremacy. In 1956, an Act was passed to recognise Sinhala as the only official language, thus, disregarding Tamil. The governments followed preferential policies that favoured Sinhala applicants for university positions and government jobs. A new constitution stipulated that the state shall protect and foster Buddhism.

Question 5.
What are the different ways in which minority communities get a fair share in poweb?
Answer:

Question 6.
How did the Tamil community of Sri Lanka react to the majoritarianism in Sri Lanka?
Answer:

Question 8.
Power sharing arrangements can also be seen in the way political parties, pressure groups and movements control or influence those in power. Justify.
Answer:

Question 9.
Why is power sharing necessary in a country like India?
Answer:

Question 10.
How many times did the Belgian leaders amend their constitution between 1970 and 1993, and why?
Answer:
The Belgian leaders recognised the existence of regional differences and cultural diversities. Between 1970 and 1993, they amended their constitution four times as to work out an arrangement that would enable everyone to live together in the same country.

(ii) Moral Reasons:
The second deeper reason is that power sharing is the spirit of democracy. Democracy involves the participation of people in the functioning of the coyntry. People have the right to be informed and consulted on how they are to be governed. A legitimate government is one where citizens, through participation, acquire a stake in the system.

Question 3.
Discuss the system of checks and balances.
Answer:

Question 4.
Explain how power can be shared among governments at different levels.
Answer:

Read the clues and search for the answers from the word search box: 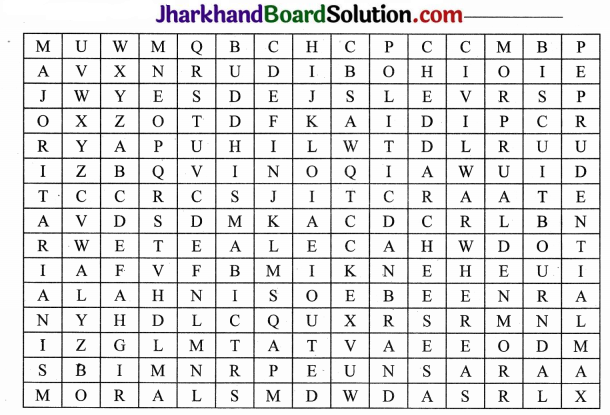 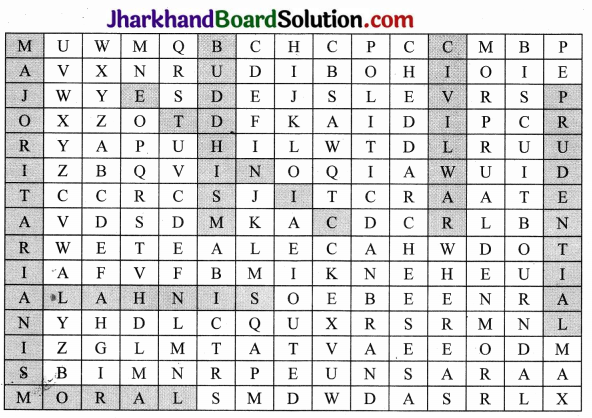