Question 1.
What was the work entrusted to the International War Tribunal set up in Nuremberg after the war?
Answer:
International War tribunal was set up to prosecute Nazi war criminals for crimes against peace and humanity.

Question 8.
What is hyperinflation?
Answer:
Hyperinflation is a situation in which prices is rise very high.

Question 10.
In which country was Hitler born?
Answer:
Hitler was born in Austria.

Question 16.
Who was Hjalmar Schacht?
Answer:
Hjalmar Schacht was a great economist who was given the responsibility of economic recovery by Hitler.

Question 23.
What was ‘Holocaust’?
Answer:
The ‘Holocaust’ was a Nazi killing operation which was carried out to kill the Jews.

Question 25.
Which community Hitler hated the most?
The Jews.

Question 1.
State the verdict of the Nuremberg Tribunal. Why the Allies did not want to impose harsh punishment on defeated Germany?
Answer:
Germany had waged a genocidal war. It resulted in the mass murder of selected groups of innocent civilians of Europe. After the Second World War, the Nuremberg Tribunal against Germany verdicted only eleven leading Nazis to death while many other were imprisoned for life.

The retribution did come but the punishment of the Nazis was far short compared to the brutality and extent of their crimes they had committed against humanity. The Allies did not want to be as harsh on defeated Germany as they had been after the First World War because they realised that the rise of Adolf Hitler was the result of the humiliation Germany faced after the First World War.

Question 2.
Write a note on the Weimar Republic.
Or
Politically, the Weimer was fragile republic. Explain the statement.
Answer:
The Weimar “epublic is the name given by historians to the parliamentary republic established in 1919 in Germany to replace the imperial form of government. In 1919, a national ass mbly was convened in the city of Weimar, where a new constitution for the Germa Reichstag was written.

This liberal democracy eventually lapsed in the early 1930?., leading to the ascent of the NSDAP and Adolf Hitler in 1933. In its 14 years, the Weimar Republic faced numerous problems, including hyper-inflation, political extremists and their paramilitaries and hostility from the victors of the First World War.

3. The Allied armies also occupied the resource rich Rhineland for much of the 1920s. Many Germans held the new Weimar Republic responsible for not only the defeat in the war, but also for the disgrace at Versailles.

Question 4.
Who were called as the November criminals ? Why were they targeted ? Explain.
Answer:
The First World War had a significant impact on Europe, both psychologically and financially. Europe from a continent of creditors turned into one of debtors. Unfortunately, infant Weimar Republic was being made to pay all the remaining debts.

The Republic also carried burden of war guilt and national humiliation. Those who supported the Weimar Republic mainly socialists, Catholics and democrats, came to be know as ‘November Criminals’. They were targeted because they became easy targets of attack in the conservative nationalist circles.

Question 7.
What was the impact of the Great Depression on the United States of America?
Answer:
The Great Depression started when the Wall Street Exchange of USA crashed in 1929. As a result, values of shares dropped significantly and the national income of the USA fell by half. Hundreds of American banks, factories, mining companies and business firms went bankrupt. There was large-scale unemployment, poverty and starvation in the country. The effects of this recession in the US economy were felt worldwide.

The new state machinery under Hitler established complete control over the economy, media, army and judiciary. Exclusive surveillance and security forces like the protection squads, the security service Gestapo and criminal police were created to control and mould society in the way that the Nazis wanted.

In this, he exposed the German Western Front to British aerial bombing and the Eastern front to the powerful Soviet armies. The Soviet Red Army defeated Germany at Stalingrad badly. After this, they established Soviet hegemony over the entire Eastern Europe for half a century.

Question 4.
Who was Adolf Hitler? Trace his rise to power and downfall in Germany.
Answer:

Question 7.
Describe Hitler’s Policy towards youth.
Answer:
Hitler’s Policy Towards Youth: Hitler’s policy towards youth can be summarised as below:
1. Total Control over Schools:
Hitler was fanatically interested in the youth of the country. He felt that a strong Nazi society could be established only by teaching children the Nazi ideology. This required a control over the child, both inside and outside the school.

2. Purification of Schools:
All schools were cleansed and purified. This meant that teachers who were Jews or seen as ‘politically unreliable’ were dismissed. Children were first segregated : Germans and Jews could not sit together or play together. Subsequently, ‘undesirable children’ were thrown out of schools, and finally, in the 1940s, they were taken to the gas chambers.

3. New Education Policy:
To popularise his ideology, Hitler announced a New Education Policy. Under this, school textbooks were rewritten. Racial science was introduced to justify Nazi ideas of race. Stereotypes about Jews were popularised even through math classes. Children were taught to be loyal and submissive, hate Jews, and worship Hitler.

4. Division of the Life:
Life of the youth was divided into different stages. At each stage, he had to pass through various training and teaching programmes.

5. Formation of Hitler Youth:
The Youth League of the Nazis was founded in 1922. Four years later, it was renamed ‘Hitler Youth’. To unify the youth movement under Nazi control, all other youth organisations were systematically dissolved and finally banned.

Question 8.
Explain the Nazi’s Art of Propaganda.
Answer:
The Nazi’s Art of Propaganda: The Nazis used language and media with great care. Their art of propaganda can be explained as follows:
1. Various Codes:
Nazis used code language. The terms they coined to describe their various parctices are not deceptive but chilling also. Nazis never used the words, ‘kill’ or ‘murder’ in their official communication. Mass killings were termed special treatment, final solution (for the Jews), euthanasia (for the disabled), selection and disinfection. ‘Evacuation’ meant deporting people to gas chambers. They were labelled ‘disinfection-areas’, and looked like bathrooms equipped with fake showerheads.

2. Use of Mass Media:
Media was carefully used to win support for the regime and popularise its worldview. The Nazi ideas were spread through visual images, radio, posters, catchy slogans and leaflets. In posters, groups identified as the enemies of Germans were stereotyped, mocked, abused and described as evil. Socialists and liberals were presented as weak and degenerate. They were attacked as malicious foreign agents.

3. Films:
Propaganda films were made to create hatred for Jews. The most infamous film was “The Eternal Jew”. 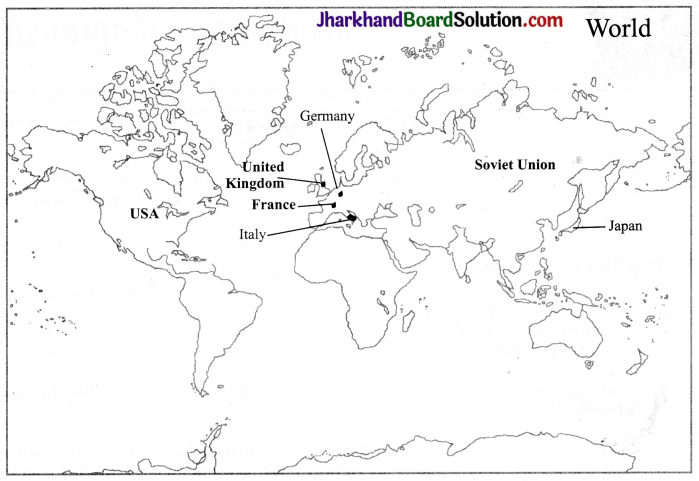