An analytical paragraph is a body paragraph. It presents evidence in order to prove the thesis. In it, specific words, phrases or ideas are found as evidence. There is specific connection between the evidence and the topic sentence. Its main goal is to explain something bit by bit to enhance understanding. Analytical paragraph is written about the analysis of a text, a process or an idea. Map is actually a diagram that displays information visually. It can be created using pen and paper. The rules for creating a map are simple.

You must have seen graphs, charts, etc., in the newspapers, magazines, books, etc. The main purpose of chart is to show numerical facts in visual form so that they can be understood quickly, easily and clearly.

These are actually visual representation of data collected.
There are various methods through which data can be presented quickly.

1. Bar chart: Bar chart is one of the most popular and commonly used methods of presenting data. It makes the comparative study of data easy. It consists of a group of bars which are equi-distance from each other. Bar charts are read by the measurement of the length or the height of the bars. It is used for the clarity of presentation. The example is as follows: 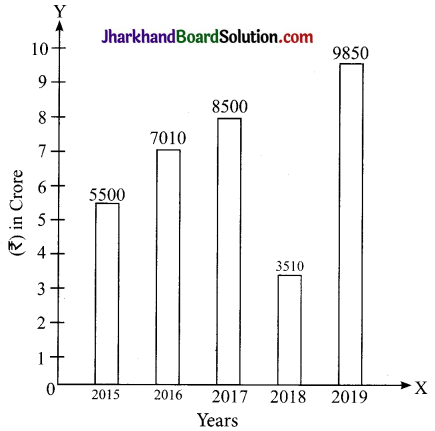 2. Pie chart: Pie chart is used to compare a part of whole. It is used to represent a circular representation of data. Each part is in proportion to its share of the whole data. In circular figure, it is divided into different sectors or segments. 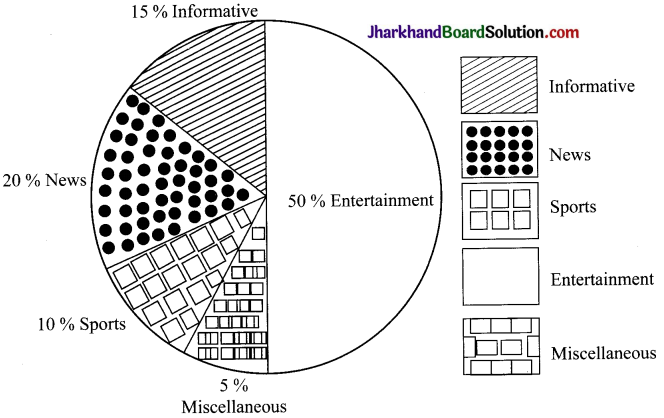 3. Tabular presentation: It is one of the most common forms of data presentation.
Production of steel and sales in rupees 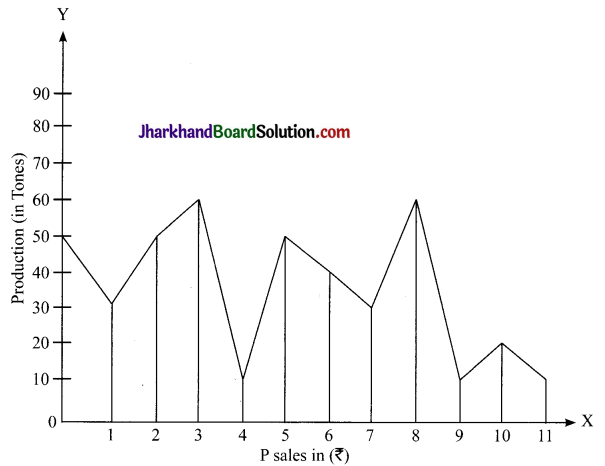 5. Histogram: Histogram is a bar graph that shows data in intervals. It can be represented in the following manner. 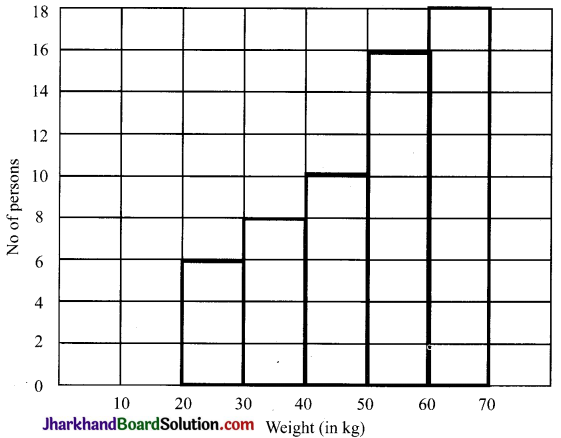 Vertical Bar Diagram: In the table given, the birth rate in India has been given according to census survey of different years. Put the information in the form of a vertical simple bar diagram. 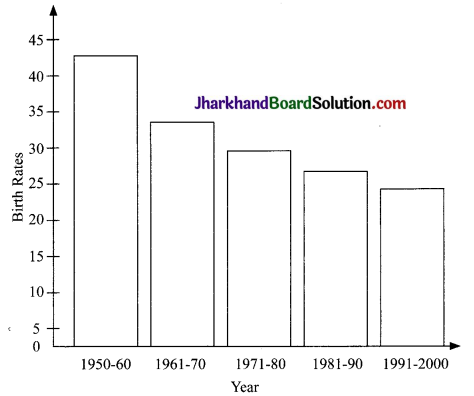 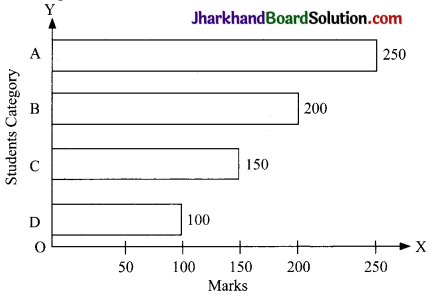 Analytical reports: Analytical reports are one of the most important business intelligence components. It is a type of business report that uses qualitative and quantitative company data to analyse as well as evaluate a business strategy or process. Analytical reporting is based on historical data statistics and can also deliver predictive analysis of a specific issue.

A set of statistical data presented on a graph paper is called a graph. But while presenting the data on a graph paper we get different points. Each point corresponds to a value of statistical series. A line graph has X and Y axis. All line graphs must have a title and a key. All the lines must be connected to the data points. The lines on a line graph can go in upward direction and in downward direction. Line graphs are able to answer the questions pertaining to data. A line graph may also be referred to as a line chart. Line graph can be used to compare different events, situations and information.

There are two axes of a line graph. The x-axis of a graph shows the occurrences and the categories being compared over time and the y-axis represents the scale. All the line graphs must have a title. It provides a general overview of what is being displayed. A line graph represents the event, situation and information being measured in due course of time.

Question 1.
Observe the given graph and analyse the data. Monthly production of an iron factory in(Tons) and sales in (Lakhs) rupees. 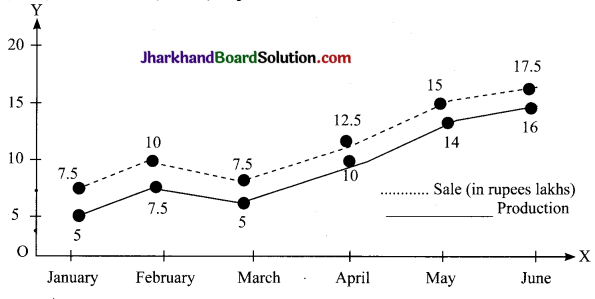 (iii) How much production of Kawasaki increased between 2012-13?
Answer:
It increased approximately 3%.

Question 4.
Given below is the turnout of voters including male and female of Maharashtra from 1990 to 2020. Interpret the data.

Question 5.
Observe the given figure carefully. It shows one weeks’ sales figures of cars of different companies in percentage. Also, interpret the data in detail. 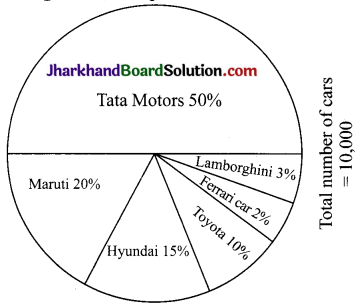 Question 6.
Study the pie-chart showing the % of pass out students of an engineering college from different states. Study the data and highlight the main trends that emerge out of your study in detail. 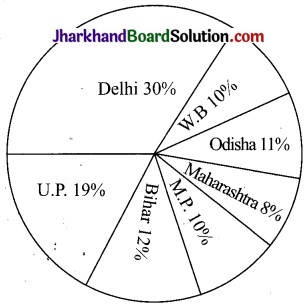 Question 8.
Study the pie-chart and explain it in detail. The ABC Publishers invested crore on all the items. 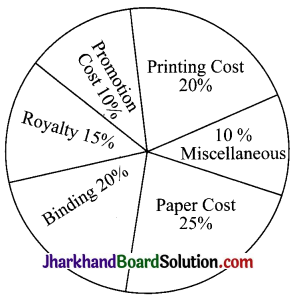 Answer:
From the above details, it can be inferred that ABC publishers invested a major portion of the amount, i.e., 25 lakh on paper cost. The cost incurred on binding and printing was almost the same, i.e., 20 lakh each on both heads. About 15 lakh was invested on the royalty of authors. The promotion cost and miscellaneous cost was almost the same. It was l0 lakh on each head. So, it can be said tiat the ABC Publishers spent this amount on all the heads concerning to publishing sector.

Question 9.
Study the pie-chart given below and explain it in detail. In the year 2015, Regional Market shares value at 100 crore. 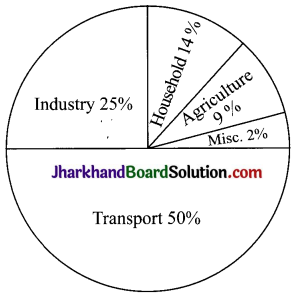 Question 10.
The chart given below explains the ten causes of deaths in India. It includes the people of all ages due to various diseases. Using the information given in the chart, interpret the data accordingly and rationally. No additional information should be added in the answer.
Ten causes of Death
(People of all age groups)

Answer:
The chart mentioned above shows the data regarding the top ten causes of deaths in India. It is quite evident from the data that most deaths occurred due to heart diseases in India. About 17.5% of men and women died due to heart diseases in India. The males (18.3) and female (15.9) died due to heart diseases. As the data shows, due to respiratory diseases the number of deaths in India was 9.2 in total. Again males dominate over the female in respiration disease, i.e., 10.1% and 8.3% respectively. But the sorry state of affairs is that more female, i.e., 8.9% suffered due to diarrheal diseases. This disease was seen less in male rather thin a females population. Due to fractures and injuries less number of people die. Due to epidemic diseases also, the number of deaths among male was 8.9% while among women it was 7.5%. Unintentional injury was also one of the diseases by which the female were more affected than the males. So, these were the factors that led to the death of the males as well as the females.

Question 11.
The chart given below shows the Index of Markets of various segments of the Indian industries using the information given in the chart, interpret the data in detail and rationally.

Answer:
The given Index shows a mixed trend. In the Real Estate Sector, there was an upward trend in the year 2020 in comparison to 2019. The main jump was seen in FMCG Sector. But in Print and Technology, there was downward trend. It decreased approximately upto 1000 crore. The mixed trend was shown in the given details. In private sector, there was slight jump in comparison to the last year. In Print Technology, science and technology and FCI, there was downward trend. The upbeat mood was seen only in FMCG sector. So, it can be said that in some sectors, there was a boo but in some sectors there was a drop.

Question 12.
Observe the given line graph and analyse the data. 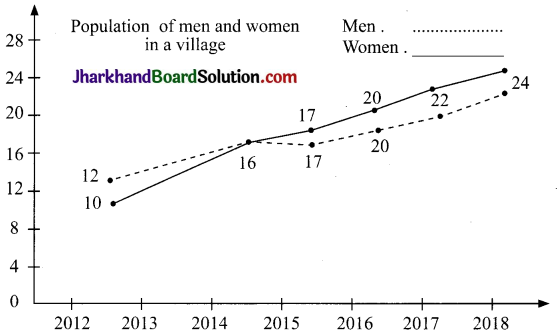 Question 13.
Study the given histogram that shows the number of workers of a village corresponding to different range of weekly wages. Interpret the data and explain the main features.

Question 14.
Study the given histogram that shows distribution of social classes and interpret the data rationally. Also highlight its main features. 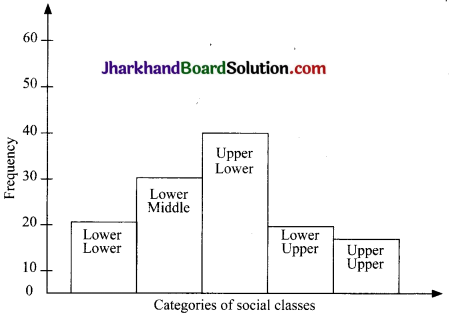 Question 15.
See the given image and write an analytical report on this. 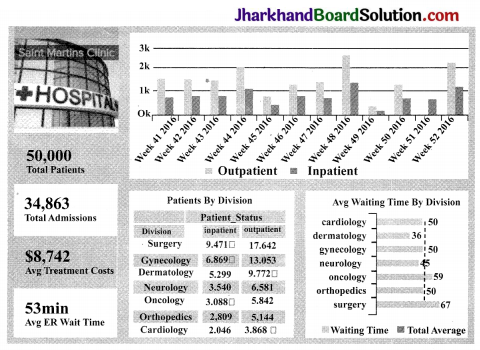 Answer:
The above data lays emphasis on healthcare matrices. It combines statistics and historical data. It goes deeper into the analysis of trends. It can serve as a fundamental part of generating future decisions. These are important to run and modify a hospital strategy. The data in healthcare are becoming expansive and increasing the variety of information it provides. It also uses reports in the form of a dashboards so that eveiy analytical information generated has its own measurement and quality of evidence. The average waiting time clearly increases the effectiveness of different hospital departments. The number of patients can explain why some divisions have the bigger amount of waiting time. It therefore proposes a solution to reduce it. It also reduces costs that directly affect the department. This metric is important for the finance department. The holistic view of all the analysis created and presented in this dashboard cell help management to make better decisions. This classification can also serve as an analytical report. It can then be used as road map to a successful hospital strategy.

Question 16.
See the given figure and write an analytical graph analysis on it. 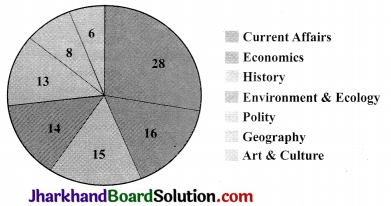