Question 3.
Which city became the hub of the new print culture, catering to the Western- style schools?
(a) Strasbourg
(b) Shanghai
(c) Goa
(d) Paris
Answer:
(b) Shanghai

Question 5.
Who brought the knowledge of woodblock printing with him to Italy from China?
(a) Marco Polo
(b) Gutenberg
(c) Voltaire
(d) Jane Austen
Answer:
(a) Marco Polo

Question 8.
What was the first book printed by Gutenberg?
(a) Diamond Sutra
(b) Samachar Chandrika
(c) Sambad Kaumudi
(d) The Bible
Answer:
(d) The Bible

Question 4.
What is Platen?
Answer:
Platen, in letterpress printing, is a board which is pressed onto the back of the paper to get the impression from the type. At one time, it is used to be a wooden board; later it was made of steel.

Question 5.
What was the print revolution?
Answer:
The print revolution was not just a development, a new way of producing books; it transformed the lives of people, changing their relationship to information and knowledge, and with institutions and authorities. It influenced popular perceptjpns and opened up new ways of looking at things.

Question 7.
What were almanacs?
Answer:
Almanac was an annual publication giving astronomical data, information about the movements of the sun and moon, timing of full tides and eclipses, and much else that was of importance in the everyday life of people.

Question 8.
What were chapbooks?
Answer:
Chapbooks were pocket-sized books that were sold by travelling pedlars called chapmen. These became popular from the time of the sixteenth-century print revolution.

Question 9.
What were penny magazines?
Answer:
Penny magazines were especially meant for women. They were manuals teaching proper behaviour and housekeeping.

Question 10.
What did the Deoband Seminary publish?
Answer:
The Deoband Seminary, founded in 1867, published thousand and thousand fatwas telling Muslim readers how to conduct themselves in their everyday lives, and explaining the meanings of Islamic doctrines.

Question 1.
How did the print material come to Europe from China?
Answer:
For centuries, silk and spices have flowed from China to Europe through the silk route.

Question 2.
How did printing of visual material lead to interesting publishing practices?
Answer:
Printing of visual material led to interesting publishing practices. In the . late eighteenth century, in the flourishing urban circles at Edo (later to be known as Tokyo), illustrated collections of paintings depicted an elegant urban culture, involving artists, courtesans, and teahouse gatherings.

Question 3.
Describe the features of the book that were printed initially.
Answer:
The printed books initially resembled the written manuscripts in appearance and layout. The metal letters imitated the ornamental handwritten styles. Borders were illuminated by hand with foliage and other patterns, and illustrations were painted. In the books printed for the rich, space for decoration was kept blank on the printed page. Each purchaser could choose the design and decide on the painting school that would do the illustrations.

Question 4.
What led to the beginning of Protestant Reformation?
Answer:
In 1517, the religious reformer Martin Luther wrote Ninety Five Theses criticising many of the practices and rituals of the Roman Catholic Church. A printed copy of this was posted on a . chu’rch’door in Wittenberg. It challenged the Church to debate his ideas. Luther’s writings were immediately reproduced in vast numbers and read widely. This led to a division within the Church and to the beginning of the Protestant Reformation.

Question 5.
What strategies did the printers and publishers continuously develop to sell their products?
Answer:
Printers and publishers continuously developed new strategies to sell their products. Nineteenth-century periodicals serialised important novels, which gave birth to a particular way of writing novels. In the 1920s in England, popular works were sold in cheap series, called the Shilling Series. The dust cover or the book jacket is also a twentieth-century innovation.

Question 7.
Discuss the types of books printed in the Battala area in central Calcutta.
Answer:
In Bengal, an entire area in central Calcutta, the Battala, was devoted to the printing of popular books. One could buy cheap editions of religious tracts and scriptures, as well as literature that was considered obscene and scandalous. By the late nineteenth century, a lot of these books were being profusely illustrated with woodcuts and coloured lithographs. Pedlars took the Battala publications to homes, enabling women to read them in their leisure time.

Question 8.
Describe the characteristics of women readers and writers of the nineteenth century Europe.
Answer:

Question 9.
How did the ideas of scientists and philosophers become accessible to the common people?
Answer:

Question 2.
Explain how with the printing press, the line that separated the oral and reading cultures became blurred.
Answer:
Access to books created a new culture of reading.
(i) Common people lived in a world of oral culture. Knowledge was transferred orally. People collectively heard a story, or saw a performance. Now books could reach out to wider sections of people. If there was a hearing public before, now emerged a reading public.

(ii) The transition was not very simple. Books could be read only by the literate, and the rate of literacy in most European countries was very low till the twentieth century. Publishers had to keep in mind the wider reach of the printed work. Even those who could not read could enjoy listening to books being read out. Printers began publishing popular ballads and folk tales, and illustrated it profusely with pictures. These were then sung and recited at gatherings in villages and in taverns in towns.

Question 3.
What was the reaction of the Roman Catholic Church towards the influence of the people on religious literature?
Answer:

Question 4.
What points were kept in mind while developing children’s books in the nineteenth century?
Answer:

Question 5.
‘TVemble, therefore, tyrants of the world! Tremble before the virtual writer!’ Who made this statement? What does it refer to?’
Answer:

(i) The writings of enlightenment thinkers provided a critical commentary on tradition, superstition and despotism. They argued for the rule of reason rather than custom, and demanded that everything be judged through the application of reason and rationality.

The sacred authority of the Church and the despotic power of the state were questioned; thus, eroding the legitimacy of a social order based on tradition. Those who read the books written by Voltaire and Rousseau saw the world with new eyes that were questioning, critical and rational.

(ii) New ideas of social revolution came into being. All values, norms and institutions were re-evaluated and discussed by a public that had become aware of the power of reason, and recognised the need to question existing ideas and beliefs.

(iii) By the 1780s there were outpourings of literature that mocked the royalty and criticised their morality. Cartoons and caricatures typically suggested that the monarchy remained absorbed only in sensual pleasures while the common people suffered immense hardships. This literature circulated underground and led to the growth of hostile sentiments against the monarchy.

Question 8.
Describe the Vernacular Press Act, 1878.
Answer:
(i) However, after the Revolt of 1857, the attitude of the freedom of the press changed. Enraged Englishmen demanded a clamp down on the ‘native’ press. As vernacular newspapers became assertively nationalist, the colonial government began debating measures of stringent control.

(ii) In 1878, the Vernacular Press Act was passed modelled on the Irish Press Laws. It provided the government with extensive rights to censor reports and editorials in the vernacular press. From then on, the government kept regular track of the vernacular newspapers published in different provinces. When a report was judged as seditious, the newspaper was warned, and if the warning was not heeded to, the press was liable to be seized and the printing machinery confiscated,

(iii) Despite repressive measures, nationalist newspapers grew in numbers in all parts of India. They reported on colonial misrule and encouraged nationalist activities.

Question 1.
Study the image carefully and answer the following questions: 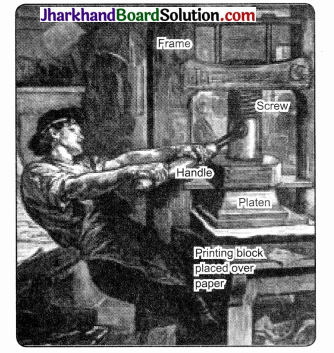 (a) Identify the person in the image.
(b) Which system did he innovate?
(c) Describe the system.
Answer:
(a) The person in the image is Johannes Gutenberg.
(b) Gutenberg learnt the art of polishing stones, became a master goldsmith, and also acquired the expertise to create lead moulds for creating trinkets. Using this knowledge, he adapted existing printing technology to design his innovation.

(c) This is the Gutenberg printing press. It had a long handle attached with the screw. The handle was used to turn the screw and press down the platen over the printing block that was placed on top of a sheet of damp paper. Gutenberg developed metal types for each of the 26 characters of the Roman alphabet and devised a way of moving them around so as to compose different words of the text.

This came to be known as the moveable type printing machine, and it remained the basic printing technology over the next 300 years. Books could now be produced much faster than was possible when each print block was prepared by carving a piece of wood by hand. The Gutenberg press could print 250 sheets on one side per hour.

Question 2.
Study the picture carefully and answer the following questions: 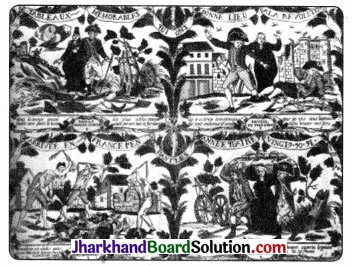 Box 4
Sometimes, the government found it hard to find candidates for editorship of loyalist papers. When Sanders, editor of the Statesman that had been founded in 1877, was approached, he asked rudely how much he would be paid for suffering the loss of freedom. The Friend of India refused a government subsidy, fearing that this would force it to be obedient to government commands.
(a) What is the context being referred to over here?
(b) Why was there such an action?
(c) Do you think it is right to control the press? Give reasons for your answer.
Answer:
(a) Censorship of press is being talked about over here. The East India Company was worried about Englishmen in India who openly criticised the misrule and actions of the Company through the print media. After the Revolt of 1857, the Vernacular Press Act was passed in 1878, which gave the government extensive rights to censor reports and editorials in the vernacular press.

(b) Freedom of the press got curbed. It is through print that people express their views and opinions and those reading it form a picture of the society, learn about the functioning and administration of the government. If information is withheld, the society at large will be in dark. Press was mainly censored at that time to cut down and control the nationalist movement and to restrict people on reporting about colonial misrule.

(c) It is not right to control the press. The press should have the freedom to express its views in print or any other medium and relay it to the mass. The common people depend on the press to form an opinion about the government. The society should judge correctly the information given in the press, analyze it carefully and take any action required.

If information is curbed, people will not be able to form the right views and incorrect action may be taken which may lead to undesirable consequences. If the society needs to progress and develop, the print media or any other media should be given the freedom. The media should channelize information with responsibility and care.