Question 1.
Imagine that you are Marco Polo. Write a letter from China to describe the world of print which you have seen there.
Answer:
Dear Robert Hope, this letter finds you in happy and cheerful disposition. Presently, I am in China, studying about the wonderful technique that Chinese are using for printing. With paper it is possible to produce manuscripts, carefully written by scribes. China has the technology of woodblock printing. Books are being produced with this technique to spread knowledge and educate people.

Chinese paper is reaching Europe through the silk route. I am planning to bring this technology of woodblock printing to Italy when I return home. Please permit me to end my letter here. I shower you with lots of love and affection and regards to your family members. Your best friend Marco Polo.

Question 2.
You are a bookseller advertising the availability of new cheap printed books. Design a poster for your shop window.
Answer:
Self-help Hints:

Question 3.
Write briefly why some people feared that the development of print could lead to the growth of dissenting ideas.
Answer:
Print created the possibility wide circulation of ideas, and introduced new world of debate and discussion. Even those who did not agree with the established authorities could now print and circulate their ideas. Through the printed message, they could influence people to think differently, and move them to ‘action. Therefore, some feared that if there was no control over what was printed and read, rebellious and irreligious though%might spread.

Question 3.
Imagine that you are a cartoonist in France before the revolution. Design a cartoon as it would have appeared in a pamphlet.
Answer:
Self-help Hints:

(i) Print popularised the ideas of the Enlightenment thinkers. Collectively, their writings provided a critical commentary on tradition, superstition and despotism. They argued for the rule of reason rather than custom, and demanded that everything be judged through the application of reason and rationality.

They attacked the sacred authority of the Church and despotic power of the state, thus eroding the legitimacy of social order based on tradition. Those who read the writings of Voltaire and Rousseau saw the world through new eyes that were questioning, critical and rational.

(ii) Print created a new culture of dialogue and debate. All values, norms and institutions were re-evaluated and discussed by a section of public that had become aware of the power of reason, and recognised the need to question existing ideas and beliefs. Within this public culture, new ideas of social revolution came into being.

(iii) By the 1780s there was an outpouring of literature, especially cartoons and caricatures that mocked the royalty and criticised their morality, In the process it raised questions about the existing social order. The monarchy neglected the sufferings of the common man and was only involved in sensual pleasures.

Question 6.
Look at Fig. 13. What impact do such advertisements have on the public mind? Do you think everyone reacts to printed material in the same way? 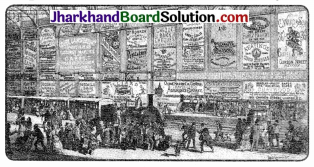 Answer:
Advertisements play an important role in attracting consumers to a product and shaping the opinion of the people. With various visual appeals, such as catchy slogans, tag lines and images an advertisement tempt people towards a certain product. People may not react to the printed material in the same way. It depends on their needs and wants, their age, their likes and dislikes, etc. 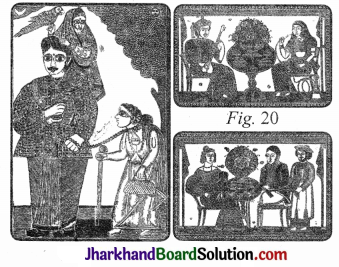 (a) What comments are the artists making on the social changes taking place in society?
(b) What changes in society were taking place to provoke this reaction?
(c) Do you agree with the artist’s view ?
Answer:
(a) These three images reflect the transformation taking place in the society. Women began to read, write and they were also written about. Women started educating themselves. They started demanding equal status and wanted to come out of the patriarchal system of society and dominance.

(b) Education among women was encouraged by many liberal husbands and fathers. Women did not want to confine themselves only to domestic affairs but also to get involved in national movements and social activities.

(c) No, I do not agree with the artist’s view because women should be treated equally. They should not be dominated by their male partners, be it their father, brother, or husband. They should be given their space to express their opinion and actively participate in the progress and development of the society.

Question 1.
Give reasons for the following:
(a) Woodblock print only came to Europe after 1295.
(b) Martin Luther was in favour of print and spoke out in praise of it.
(c) The Roman Catholic Church began keeping an Index of Prohibited books from the mid-sixteenth century.
(d) Gandhi said the tight for Swaraj is a fight for liberty of speech, liberty of the press, and freedom of association.
Answer:
(a) After many years of exploration in China, Marco Polo, a great explorer, returned to Italy in 1295. China already had the technology of woodblock printing. Marco Polo brought this knowledge back with him. Then Italians produced books l with wood blocks and soon the technology
spread to other parts of Europe.

(b) (i) Martin Luther had said ‘Printing is the ultimate gift of God and the greatest one’. In 1517, The Religious Reformer wrote Ninety Five Theses criticising many of the practices and rituals of the Roman Catholic Church.
(ii) A printed copy of this was posted on a church door in Wittenberg. It challenged the Church to debate his ideas.

(iii) Luther’s writings were immediately reproduced in vast numbers and read widely This led to a division within the Church and to the beginning of the Protestant Reformation.

(c) (i) Print and religious literature inspired many distinctive individual interpretations of faith even among little-educated working people.

(ii) In the sixteenth century, Menocchio, a miller in Italy, began to read books and reinterpreted the message of the Bible and formulated a view of God and Creation that enraged the Roman Catholic Church.

(iii) When the Roman Church began its inquisition to repress heretical ideas, Menocchio was hauled up twice and ultimately executed.

(iv) The Roman Church, troubled by such effects of popular readings and questionings of faith, imposed severe control over publishers and booksellers, and began to maintain an Index of Prohibited Books from 1558.

(d) (i) In 1922, Gandhiji strongly advocated the importance of liberty of speech, liberty of the press and freedom of association.

(ii) The government tried to curb these three powerful vehicles of expressing and cultivating public opinion.

(iii) Gandhiji encouraged the people to fight for Swaraj, the Khilafat which meant fight for liberty of speech, liberty of the press and freedom of association.

Question 2.
Write short notes to show what you know about:
(a) The Gutenberg Press
(b) Erasmus’s idea of the printed book
(c) The Vernacular Press Act
Answer:
(a) (i) Johannes Gutenberg developed the first-known printing press in the 1430s.

(ii) From his childhood he had seen wine and olive presses. Subsequently, he learnt the art of polishing stones, became a master goldsmith, and also acquired the expertise to create lead moulds used for making trinkets.

(iii) Drawing on this knowledge, Gutenberg adapted existing technology to design his innovation. The olive press provided the model for the printing press, and moulds were used for casting the metal types for the letters of the alphabet.

(iv) By 1448, Gutenberg perfected the system. The first book he printed was the Bible. About 180 copies were printed and it took three years to produce them.

(v) The production was fast compared to the standards of that time. It was a moveable type printing machine. It could print 250 sheets on one side per hour.

(b) (i) Erasmus was a Latin scholar and a Catholic Reformer. He was against excesses of Catholicism but expressed a deep anxiety about printing.

(ii) Though he appreciated that books may give knowledge, too many books will create a glut. The printers may fill the books with stupid, ignorant, slanderous, scandalous, raving, irreligious and seditious things. This may lead to important publications losing their value.

(c) (i) After the Revolt of 1857, the enraged Englishmen demanded a clamp down on . the ‘native’ press. Modelled on the Irish Press Laws, the Vernacular Press Act was passed in 1878.

(ii) It provided the government with extensive rights to censor reports and editorials in the vernacular press.

(iii) The government kept regular track of the vernacular newspapers published in different provinces. When a report was judged as seditious, the newspaper was warned.

(iv) If the warning was ignored, the press was liable to be seized and the printing machinery confiscated.

(ii) Lives and feelings of women began to be written about in vivid and intense ways.

(iii) Liberal husbands and fathers began educating their womenfolk at home, and sent them to schools when women’s schools were set up in the cities and towns after the mid-nineteenth century.

(iv) There were many journals which published “writings by women and also explained why wSmen need to be educated.

(v) However, few families thought otherwise. Conservative Hindus believed that a literal’girl would be widowed and Muslims feared that educated women would be corrupted by Urdu romances.

(vi) Sometimes rebel women defied prohibition. In East Bengal, in the early nineteenth century, Rashsundari Debi, a young married girl in a very
orthodox household, learnt to read in the secrecy of her kitchen. The first full- length autobiography published in the Bengali language in 1876, Amur Jiban, was written by her.

(vii) From the 1860s, a few Bengali women like Kailashbashini Debi wrote books highlighting the experiences of women about how women were imprisoned at home, kept in ignorance, forced to do hard domestic labour and treated unjustly by the very people they served.

(viii) In the 1880s, in present-day Maharashtra, Tarabai Shinde and Pandita Ramabai wrote with passionate anger about the miserable lives of upper-caste Hindu women, especially widows.

(b) (i) Very small cheap books were available in the markets in nineteenth-century Madras towns and sold at crossroads, allowing poor people travelling to markets to buy them.

(ii) Public libraries were set up from the early twentieth century, expanding the access to books.

(iii) Issues of caste discrimination began to be written about in many printed tracts and essays. Jyotiba Phule wrote about the injustices of the caste system in his Gulamgiri (1871). In the twentieth century, B.R. Ambedkar in Maharashtra and E.V. Ramasamy Naicker in Madras wrote powerfully on caste and their writings were read by people all over India.

(v) Kashibaba, a Kanpur millworker, wrote and published Chhote Aur Bade Ka Sawal in 1938 to show the links between caste and class exploitation.

(vi) Another Kanpur mill worker wrote under the name Sudarshan Chakr (1935-1955), and his work was published in a collection called Sacchi Kavitayan.

(vii) By the 1930s, Bangalore cotton mill workers set up libraries to educate .themselves, following the example of Bombay workers.

(c) (i) From the early nineteenth century, a wider public could participate in public discussions and express their views.
(ii) Some criticised existing practices and campaigned for reform, while others countered the arguments of reformers. The debates were carried out in public and in print.

(iii) This was a time of intense controversies between social and religious reformers and the Hindu orthodoxy over matters like widow immolation, monotheism, Brahmanical priesthood and idolatory.

(v) The Deoband Seminary, founded in 1867, published thousands of fatwas telling Muslim readers how to conduct themselves in their everyday lives, and explaining the meanings of Islamic doctrines.

Question 2.
Why did some people fear the effect of easily available printed books? Choose one example from Europe and one from India.
Answer:

Question 3.
What were the effects of the spread of print culture for poor people in nineteenth century India?
Answer:

(iii) Bal Gangadhar Tilak wrote with great sympathy in Kesari, which led to his imprisonment in 1908, provoking in turn widespread protests all over India.