Question 1.
Give two examples where modern development that is associated with progress has lead to problems. You may like to think of areas related to environmental issues, nuclear weapons or disease.
Answer:
The examples may vary from student to student. The Narmada Bachao Andolan is a social movement by human rights activists, environmentalists, adivasis and farmers against the construction of large dams across the River Narmada. Medha Patkar was one of the major activists leading the movement. The construction of Sardar Sarovar Dam across this river in Gujarat displaced thousands of people and rendered them homeless.

They lost their means of livelihood. It destroyed the bio¬diversity by destroying thousands of acres of forests and agricultural land.Dropping of atom bomb on Hiroshima and Nagasaki, Japan during the last stages of World War II had devastating consequences. Lakhs of people were killed. People suffered from burns, radiation sickness and other injuries.

Question 2.
The way in which historians focus on industrialisation rather than on small workshops is a good example of how what we believe today about the past is influenced by what historians choose to notice and what they ignore. Note down one event or aspect of your own life which adults such as your parents or teachers may think is unimportant, but which you believe to be important.
Answer:
The answer may vary from student to student. Heavy tax and license fee should be levied on SUVs and heavy automobiles used for personal purpose. Usage of public transport should be encouraged. Public transport network should be improved. Taxes should be levied on keeping domestic pets. They should not litter the environment and surroundings. Fines should be imposed on littering public spaces by pets.

Question 3.
Look at Figs. 4 and 5. Can you see any difference in the way the two images show industrialisation? Explain your view briefly. Answer:
Fig. 4 shows the cotton-spinning mill of Lancashire beautifully lighting up the city in the twilight with electricity. But Fig. 5 shows the negative aspects of industrialisation. Chimneys released smoke, the landscape is filled with dust and smoke from the industries.

Question 4.
Imagine that you are a merchant writing back to a salesman who has been trying to persuade you to buy a new machine. Explain in your letter what you have heard and why you do not wish to invest in the new technology.
Answer:

Dear Kashi Lai
This is with reference to your letter with quotation of the price of the weaving machine. Looking at all the details and the situation, I am afraid I will not be able to purchase the machinery at present.

(i) The machine is too expensive and I do not have the amount to invest into it.

(ii) There are many labourers in my little factory and I would not like to lay them off. They are efficient.

(iii)As the work is seasonal, I can ask the workers to leave when the work is finished. However, the machine will remain unused and will have depreciation and maintenance costs.

(iv) The workers can create intricate designs and specific shapes. It is in demand by the upper class people who think that hand work symbolises refinement and class. However, the machine can only produce simple cloth. I hope you understand my situation and excuse me for the time being.
Thanking you Yours faithfully Ram Nath Agarwal

Question 5.
Look at Figs. 3, 7 and 11, then reread source B. Explain why many workers were opposed to the use of the Spinning Jenny. 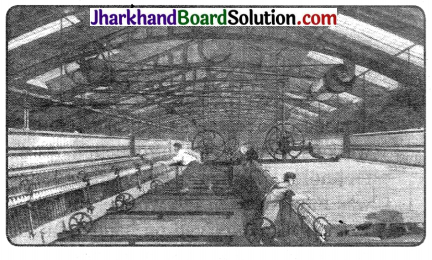 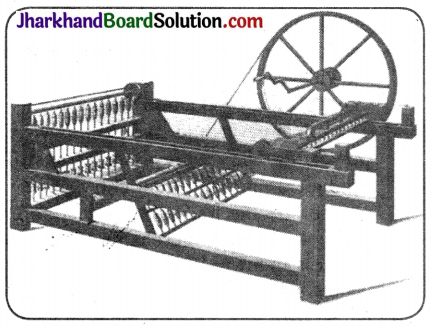 A magistrate reported in 1790 about an incident when he was called in to protect a manufacturer’s property from being attacked by workers ‘From the depredations of a lawless Banditti of colliers and their wives, for the wives had lost their work to spinning engines … they advanced at first with much insolence, avowing their intention of cutting to pieces the machine lately introduced in the woollen manufacture which they suppose, if generally adopted, will lessen the demand for manual labour.

The women became clamorous. The men were more open to conviction and after some expostulation were induced to desist from their purpose and return peaceably home. J.L. Hammond and B. Hammond, The Skilled Labourer 1760-1832, quoted in Maxine Berg, The Age of Manufactures.
Answer:
Fig. 3 shows that each member of the household was involved in the production of yarn. One wheel moved only one spindle.Fig. 7 shows that giant wheels moved by steam power could set in motion hundreds of spindles to manufacture thread. It is clear from the picture that a single person could spin a large amount of thread. It would lead to unemployment.Fig. 11 is the Spinning Jenny, devised by James Hargreaves in 1764, speeded up the spinning process and reduced labour demand.

By turning one single wheel, a worker could set in motion a number of spindles and spin several threads at the same time. It was introduced in the woollen industry. Women who survived on hand spinning began attacking the new machine. The fear of unemployment made the workers hostile to the introduction of new technology.

Question 6.
On a map of Asia, find and draw the sea and land links of the textile trade from India to Central Asia, West Asia and Southeast Asia. 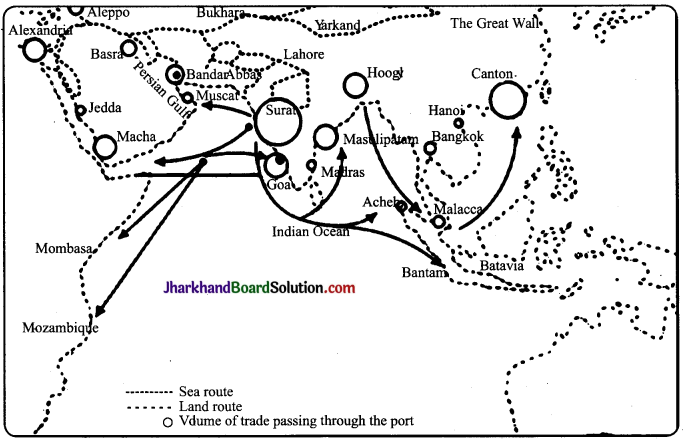 Question 1.
Explain the following:
(a) Women workers in Britain attacked the Spinning Jenny.
(b) In the seventeenth century merchants from towns in Europe began employing peasants and artisans within the villages.
(c) Thejjort of Surat declined by the end of the eighteenth century.
(d) The East India Company appointed gomasthas to supervise weavers in India.
Answer:
(a) The abundance of labour in the market affected the lives of workers. Many job seekers had to wait for weeks, spend nights under bridges or in night shelters. The Spinning Jenny speeded up the spinning process and reduced labour demand. The fear of unemployment made workers hostile to the introduction of new technology. When the Spinning Jenny was introduced in the woollen industry, women who survived on hand spinning began attacking the new machines.

(b) In the seventeenth century, merchants from towns in Europe began employing merchants and artisans within the villages because merchants could not expand their production within towns. The urban crafts and trade guilds were powerful. They were associations of producers that restricted entry of new people into the trade. It was therefore, difficult for new merchants to set up business in towns. So they turned to the countryside.

(c) (i) Before the age of machine and industries, silk and cotton goods from India dominated the international market in textiles. A vibrant sea trade operated through the main pre-colonial ports.

(ii) Surat on the Gujarat coast connected India to the Gulf and Red Sea Ports. A variety of Indian merchants and bankers were associated with in this network of export trade.

(iii) By 1750s, this network controlled by the Indians broke down and was gradually captured by the Europeans.

(iv) The Europeans first secured a variety of concessions from the local courts, then the monopoly rights to trade. This led to the decline of the old ports of Surat and Hoogly through which the local merchants had operated.

(v) From 16 million gross trade value at the end of the seventeenth century, it dropped to 3 million by the 1740s.

(d) (i) The East India Company developed a system of management and control that would eliminate competition, control costs and ensure regular supplies of cotton and silk goods.

(ii) They achieved this through a series of steps:

Question 2.
Write True or False against each state- men#
(a) At the end of the nineteenth century, 80 per cent of the total workforce in Europe was employed in the technologically advanced industrial ” sector.
(b) The international market for fine textiles was dominated by India till the eighteenth century.
(c) The American Civil War resulted in the reduction of cotton exports from India.
(d) The introduction of the fly shuttle enabled handloom workers to improve their productivity.
Answer:
(a) False
(b) True
(c) False
(d) True

Question 2.
How did the East India Company procure regular supplies of cotton and silk textiles from the Indian weavers?
Answer:
Once the East India Company established political power, it could assert a monopoly right to trade. It developed a system of management and control that would eliminate competition, control costs, and ensure regular supplies of cotton and silk goods.

(i) The Company tried to eliminate the existing traders and brokers connected with the cloth trade, and gain a more direct control the weaver. It appointed a paid servant called the gomastha to supervise weavers, collect supplies, and examine the quality of cloth.

Question 3.
Imagine that you have been asked to write an article for an encyclopaedia on Britain and the history of cotton. Write your piece using information from the entire chapter.
Answer:
(i) The earliest factories in England came up by the 1730s. The factories multiplied by the late eighteenth century. The first symbol of the new era was cotton. The production expanded in the late nineteenth century. In 1760, Britain was importing 2.5 million pounds of raw cotton to feed its cotton industry. By 1787, this iftiport soared to 22 million pounds.

(ii) A series of inventions in the eighteenth century improved steps of the:

(iii) Before the age of machine industries, silk and cotton goods from India dominated the international market in textiles.

(iv) As cotton industries developed in England, the East India Company sold British cotton goods in India. They were labelled MADE IN MANCHESTER to create a confidence in the customers about the quality of cloth.

(v) The situation changed during the First World War when the British mills produced goods to meet the needs of the army. Manchester imports into India declined. Even after the war, Manchester could not recover and recapture its old position in the Indian market,

(vi) The economy of Britain crumbled and it was unable to modernise and compete with the US, Germany and Japan.

Question 4.
Why did industrial production in India increase during the First World War?
Answer:

Question 1.
Select any one industry in your region and find out its history. How has the technology changed? Where do the workers come from? How are the products advertised and marketed? Try and talk to the employers and some workers to get their views about the industry’s history.
Answer:
Self-help Hintst