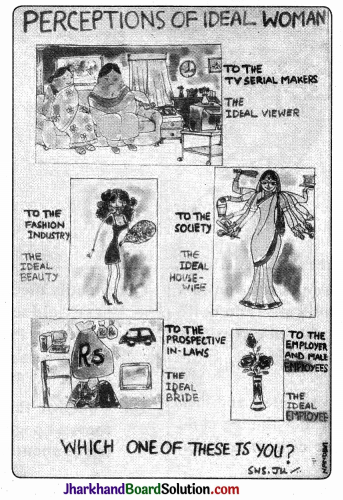 Answer:
It is good to see that women are showing their talent in every walk of life. It is not right to be agreed with any one perception of women, shown through the figures, along. In my view, an ideal woman is that who has the quality of managing both house work and work outside the house. Of course this needs an equal cooperation of man. 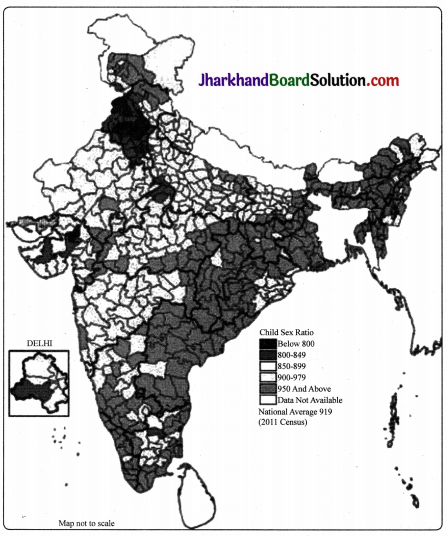 Question 4.
Compare this map with the poster on the next page. How do the two of them tell us about the same issue? 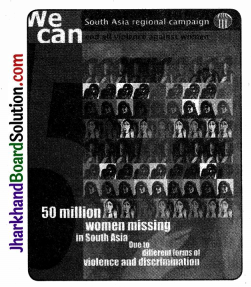 Answer:
Both map and poster are concerned about the decreasing trend of child sex ratio.

Question 5.
Could you think of some reasons why women’s representation is so low in India? Do you think America and Europe have achieved a satisfactory level of women’s representation?
Answer:
(i) The women’s literacy rate is very low and if some are educated, they are not politically motivated. They and their male family members think that politics is not the profession of women. Political parties are also not giving tickets to women candidates to fight election in proportion to their population.

(ii) No, neither America nor Europe has achieved a satisfactory level of women’s representation. In America there are only 20.2 per cent and in Europe only 19.6 per cent women in the national Parliament. These percentages are not proportional to their population in the respective countries.

Question 6.
If casteism and communalism are bad, what makes feminism a good thing? Why don’t we oppose all those who divide the society on any lines caste, religion or gender?
Answer:
(i) Feminism believes in equal rights and opportunities for men and women. It is a collection of movements and ideologies aimed at defining, establishing and defending equal political, economic and social rights for women. A feminist advocates or supports the rights and equality of women. Enhanced women power can make our society more strong.

(ii) Thus feminism can not be regarded as a bad thing. But casteism and communalism usually divide the society and enhance inequality. These two are major challenges to our democracy. Our  onstitution makers were aware of these challenges.

(iii) That is why they chose the model of a secular State. Also the Constitution of India prohibited any caste – based discrimination and laid the foundations of policies to reverse the injustices due to casteism. So we must oppose casteism and communalism but not feminism.

Question 7.
This cartoon offers an understanding of why the Women’s Reservation Bill has not been passed in the Parliament. Do you agree with this reading. 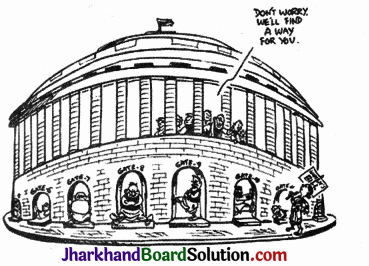 Answer:
Yes, the cartoon reflects that our legislature is man – dominated. Every gate to the parliament is well narrated by men who do not wish women to enter the course. But they pretend to show that very soon they are going to pass a bill regarding women’s reservation in the house.

(ii) Communalism is a social phenomenon which is based on the idea that religion is the principal basis of social community. It believes that people who follow different religions can not belong to the same social community. Sometimes it takes most ugly form of communal violence, riots and massacre. So communalism needs to be combated.

(iii) Secularism means there is no State religion. State should respect all religions. India does not have an official State religion. So whether I am religious or not, I must be secular and should not favour or discriminate against any religion. This attitude only can maintain a healthy atmosphere in our country.

Question 9.
I often crack jokes about people from one religion. Does that make me communal?
Answer:

Question 10.
I don’t care what my caste is. Why are we discussing all this in the textbook? Are we not promoting casteism by talking about caste?
Answer:
India is a multilingual, multireligious and caste based country. There are people of different castes living together in Indian society. So reality cannot be hidden. This is the reason why there is a discussion on caste in this textbook. We cannot promote casteism only by talking about castes.

Question 11.
Now you don’t like it! Didn’t you tell me that wherever there is domination, we should discuss it in Political Science? Will caste disappear if we keep mum about it?
Answer:

Question 1.
Mention different aspects of life in which women are discriminated or disadvantaged in India.
Answer:
(i) Literacy Rate:
The literacy rate among women is only 54% as compared with 76% among men. A smaller proportion of girl students go for higher studies because parents prefer to spend their resources on their sons’ education than spending equally on their daughters.

(ii) Unpaid Work:
The proportion of women among the highly paid and valued jobs is still very small. Though on an average, Indian women works one hour more than men eveiy day, most of them are not paid equally and their work is often not valued.

(iii) The Equal Remuneration Act, 1976 – Provides that equal wages should be paid to equal work in almost all areas of work. Women are paid less than men, even when both do exactly the same work.

(iv) Sex Ratio:
In many parts of India, parents prefer to have sons and find ways to have the girl “child aborted before she is born. This has led to a decline in the child sex ratio (the number of girl children per thousand boys) in the country to merely 919.

(v) Domestic Violence:
There are reports of various kinds of harassment, exploitation and violence against women. Both urban and rural areas have become unsafe for women. They are not safe even within their own homes from beating and other forms of domestic violence.

Question 2.
State different forms of communal politics with one example each.
Answer:
Communalism can take various forms in politics
(i) The most common expression of communalism is in everyday beliefs. These routinely involve religious prejudices, stereotypes of religious communities and belief in the superiority of one’s religion over other religions. This is so common that we often fail to notice it, even when we believe in it.

(iii) Political mobilisation on religious lines is another frequent form of communalism. This involves the use of sacred symbols, religious leaders, emotional appeal and plain fear in order to bring the followers of one religion together in the political arena. In electoral politics this often involves special appeal to the interests or emotions of voters of one religion in preference to others.

(iv) Sometimes communalism takes its most ugly form of communal violence, riots and massacre. India and Pakistan suffered some of the worst communal riots at the time of partition. The post – Independence period has also seen large scale communal violence.

(i) No Parliamentary constituency has a clear majority of one single caste.
(ii) No party wins all the votes of a particular caste. A caste is a ‘vote bank’ of one party.

Question 5.
What is the status of women’s representation in India’s legislative bodies?
Answer:

(ii) The Constitution provides to all individuals and communities freedom to profess, practise and propagate any religion, or not to follow any.

Question 9.
Consider the following statements on the meaning of communal politics. Communal politics is based on the belief that:
(i) One religion is superior to that of others.
(ii) People belonging to different religions can live together happily as equal citizens.
(iii) Followers of a particular religion constitute one community.
(iv) State power cannot be used to establish the domination of one religious group over others.
Which of the statements is/are correct?
(a) (i), (ii), (iii) and (iv)
(b) (i), (ii) and (iv)
(c) (i) and (iii) only
(d) (ii) and (iv) only.
Answer:
(c) (i) and (iii) only

Question 11.
Social divisions based on……………. are peculiar to India.
Answer:
Caste

Question 12.
Match List I with List II and select the correct answer using the codes given below the Lists: