Question 1.
Can you identify and name the various items used in making life comfortable in our villages and towns. List the items and name the material used in their making.
Answer:

Question 2.
Identify at least two resources from each category.
Answer:
Types of resources based on origin

Question 3.
Prepare a list of stock and reserve resources that you are familiar with from your local area.
Answer:
Try to find out information about different resources as you can. Below, there is an example of how you can write about one or two of them.
Stock

Question 4.
Imagine, if the oil supply gets exhausted one day, how would this affect our life style.
Answer:
Do it yourself. Sample answer is given. Transport plays a major role in the society, i. e., it is helpful for transporting of goods or grains from one place to another. So this will also affect their modem lifestyle. It would be harder for the people to generate electricity. Oil is needed to produce electricity through generators.

Question 5.
Plan a survey in your colony/village to investigate people’s attitude towards recycling of the domestic/agricultural wastes. Ask questions about:
(a) What do they think about resources they use?
(b) What is their opinion abQuestion ut the wastes, and its utilisation?
(c) Collage your results.
Answer:
Do it yourself.

Question 6.
Prepare a list of resources found in your state and also identify the resources that are important but deficit in your state.
Answer:
Do it yddrself activity. Sample answer is given. A number of minerals are found in our state. Some of them are Potassium, Calcium, Sodium, Coal, Petroleum, Iron ore, etc. But all these are not available in abundant quantity. We have a deficit of coal and bauxite.

Question 7.
What resources are being developed in your surroundings by the community/village panchayats/ward level communities with the help of community participation?
Answer:
Biomass energy, bio-gas, water (by digging well), solar energy (by setting up solar panels), etc., are developed in our surroundings by the community village . panchayats/ward level communities with community participation.

Question 9.
Try to do a comparison between the two pie charts given for land use and find out why the net sown area and the land under forests have changed from 1960¬61 to 2014-15 very marginally. Question 1.
Choose the right answer from the four alternatives given below.
(i) Which one of the following type of resource ¡s iron ore?
(a) Renewable
(b) Biotic
(c) Flow
(d) Non-renewable
Answer:
(d) Non-renewable

(iv) In which one of the following states is terrace cultivation practised?
(a) Punjab
(b) Plains of Uttar Pradesh
(c) Haryana
(d) Uttarakhand
Answer:
(d) Uttarakhand

(v) In which of the following states black soil is predominantly found?
(a) Jammu and Kashmir
(b) Maharashtra
(c) Rajasthan
(d) Jharkhand
Answer:
(b) Maharashtra

Question 2.
Answer the following questions in about 30 words:
(a) Name three states having black soil and the crop which is mainly grown in it.
(b) What type of soil is found in the river deltas of the eastern coast? Give three main features of this type of soil.
(c) What steps can be taken to control soil erosion in the hilly areas?
(d) What are the biotic and abiotic resources? Give some examples.
Answer:
(a) States having black soil are Gujarat, Maharashtra and Madhya Pradesh. This type of soil is typical of the Deccan trap (Basalt) region spread over northwest Deccan plateau and is made up of lava flows. Black soil is ideal for growing cotton and is also known as black cotton soil.

(b) Alluvial soil is found in the entire northern plains and river deltas of the eastern coast. Three main features of alluvial soil are:

(c) To stop soil erosion in the hilly areas following steps can be taken:
(i) Afforestation- planting of trees on slopes.

(ii) Ploughing along the contour lines can decelerate the flow of water down the slopes. This is called contour ploughing.

(iii) Steps can be cut out on the slopes making terraces. Terrace cultivation restricts erosion.

Question 3.
Answer the following questions in about 120 words:
(a) Explain land use pattern in India and why has the land under forest not increased much since 1960-61?
(b) How have technical and economic development led to more consumption of resources?
Answer:
(a) In India, land resources are primarily divided into agricultural land, forest land, land for pasture and grazing and waste land. According to the data, about 54% of the total land area is cultivable or fallow, 23.3% is covered by forests, and 3.3% is used for grazing. The rest is waste land.
The land under forest has not increased since 1960-61 because:

(b) (i) Technical and economic development involves more utilization and exploitation of resources for the purpose of present development.

(iii) According to Gandhiji, the greedy and selfish individuals and exploitative nature of modem technology are the root cause for resource depletion at global level.

(iv) Economic development takes place through proper utilization of available resources for the purpose of advancement of present generation.

(v) With economic development the capacity of accessing or consuming of resources by the people increases and technical development makes further resources available at their disposal.

(vi) Technical development makes resources accessible and usable. It aids in further exploitation as well as creation of new resources.

Question 1.
Make a project showing consumption and conservation of resources in your locality.
Answer:
Make aproject/chart with these guidelines.

Question 2.
Have a discussion in the class: how to conserve various resources used in your school.
Answer:
Do it yourself.

Question 4.
Solve the puzzle by following your search horizontally and vertically to find the hidden answers: Question 4.
The thin layer of grainy substance covering the surface of the earth is called
(a) soil
(b) sand
(c) mineral
(d) organic matter
Answer:
(a) soil

Question 8.
Which one of the following soil is the best for cotton cultivation?
(a) Red soil
(b) Black soil
(c) Laterite soil
(d) Alluvial soil
Answer:
(b) Black soil

Question 7.
What is fallow land?
Answer:
It is the land cultivated once in two or three years which is then left for one or two seasons to regain its fertility.

Question 1.
What do you mean by resources? How are resources classified?
Answer:
Everything available in our environment which can be used to satisfy our needs provided it is technologically accessible, economically feasible and culturally acceptable. Resources can be classified on the following ways:

Question 3:
What is the difference between Stock resources and reserves?
Answer:

Question 5.
Soil is the most important renewable natural resource. Explain.
Answer:
It is the medium of plant growth and supports different types of living organisms on the earth. Soil is a living system. It takes millions of years to form soil upto a few cm in depth. Relief, parent rock or bed rock, climate, vegetation and other forms of life and time are important factors in the formation of soil.

Various forces of nature such as change in temperature, actions of running water, wind and glaciers, activities of decomposers, etc., contribute to the formation of soil. Chemical and organic changes, which take place in the soil, are equally important. Soil also consists of organic (humus) and inorganic materials.

Question 6.
Give a brief note on the productivity of alluvial soil.
Answer:
Alluvial soils are very fertile. Mostly these soils contain proportion of potash, phosphoric acid and lime which are ideal for the growth of sugarcane, paddy, wheat and oth$r cereal and pulse crops. Due to its high fertility, regions of alluvial soils are intensively cultivated and densely populated. Soils in the drier areas are more alkaline and can be productive after proper treatment and irrigation.

Question 9.
What is the inter-relationship between nature, technology institutions?
Answer:
Human beings interact with nature to fulfil their needs using the resources that are available. They also transform the natural stuff into resources through technology and create institutions to accelerate their economic development.

Question 11.
What is Agenda 21?
Answer:
It is the declaration signed by the world leaders in 1992 at the United Nations Conference on Environment and Development (UNCED), which took place at Rio de Janeiro, Brazil. It aims at achieving global sustainable development. It is an agenda to combat environmental damage, poverty, disease through global co-operation on common interests, mutual needs and shared responsibilities.

Question 12.
What is sustainable development?
Answer:
Sustainable economic development means ‘development should take place without damaging the environment, and development in the present should not compromise with the needs of the future generations.’

Question 3.
Describe the different types of soils in India emphasizing on any two characteristics.
Answer:
India has varied relief features, landforms, climatic realms and vegetation types. All of these have contributed in the development of various types of soils.
(i) Alluvial soil

Question 6.
Explain the land use pattern of India.
Answer:
(i) Total geographical area of India is 3.28 million sq km. Land use data, however, is available only for 93 per cent of the total area because the land use reporting for most of the north-east states except Assam has not been done fully. Some areas of Jammu & Kashmir occupied by Pakistan and China have also not been surveyed.

(ii) The land under permanent pasture has also decreased.

(iii) Most of the lands other than the current fallow lands are either of poor quality or the cost of cultivation of such lands is very high. Hence, these lands are cultivated once or twice in about two to three years and if these are. included in the net sown area, the percentage of NSA in India comes to about 54 of the total reporting area.

(iv) The pattern of net sown area varies greatly from one state to another. It is over 80 per cent of the total area in Punjab and Haryana and less than 10 per cent in Arunachal Pradesh, Mizoram, Manipur and Andaman and Nicobar Islands.

(v) Forest area in the country is far lower than the. desired 33 per cent of geographical, area, as it was outlined in the National Forest Policy (1952).

Question 1.
Look at the picture carefully and explain the formation for soil. 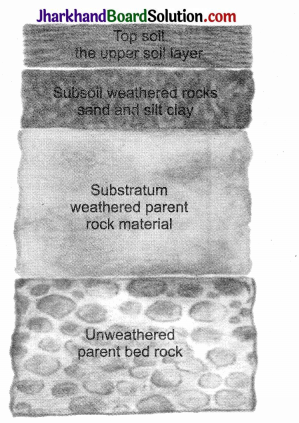 Answer:
The soil is a living system. It takes millions of years to form soil upto a few cm in depth. The important factors in the formation of soil are relief, parent rock or bed rock, climate, vegetation and other forms of life and time. Various forces of nature such as change in temperature, actions of running water, wind and glaciers, activities of decomposers etc., contribute to the formation of soil. Chemical and organic changes which take place in the soil are equally important. Soil also consists of organic and inorganic materials.

Question 2.
Explain the distribution of relief features in India through the diagram. 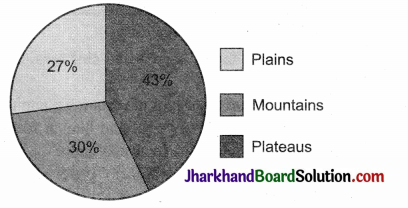 Question 3.
Explain the types of soil found in different regions of India on a map.
Answer:
See the given map of India. 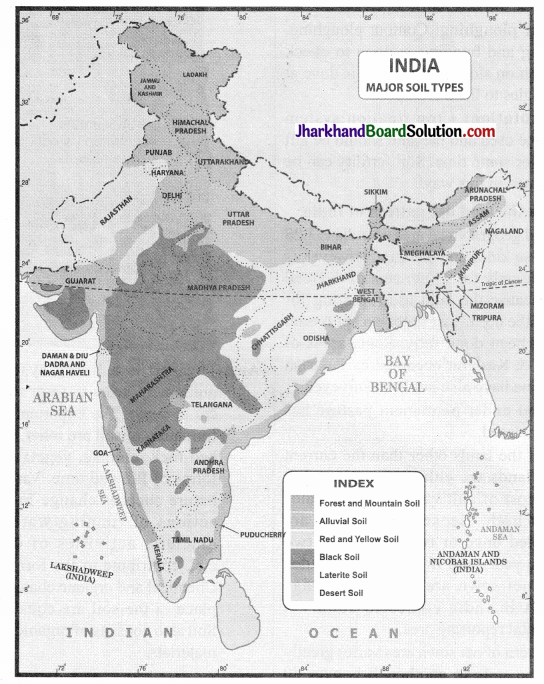