→ Various material resources derived from the nature for the benefit of mankind are called natural resources.

→ Air: It is an inexhaustible natural resource essential for the sustenance of life. The thick blanket of air that surrounds the earth is called atmosphere. This atmosphere keeps the average temperature of the earth fairly steady.

→ Wind: Moving air is called wind. In coastal areas, the uneven heating of land and water creates winds. During day, the direction of wind is from sea to land (sea breeze) while at night, wind blows from land to sea (land breeze).

→ Rain: When water bodies are heated during the day, water vapour goes into the air. As air rises, it expands and cools forming tiny water droplets? These droplets grow bigger by condensation and fall down as rain.

→ Water: 97% of the water on earth is in oceans and only 3% is fresh water. Of this 3%, only 1 % is available for use and the rest is present in glaciers. Rainwater harvesting improves the availability of fresh water. It is essential for the growth and sustenance of plants and animals.

→ Soil: Soil is formed by various physical, chemical and some biological processes. Sun, water and wind, all contribute to the formation of soil. Some organisms, like lichens, grow on rocks and release chemicals which cause the rock surface to powder down into soil.

→ Soil is composed of different sizes of particles which decide the soil type.

→ Soil pollution: Modem farming practices which use chemical fertilizers and pesticides are harmful for the soil. We should use the soil sustainably and plant trees to prevent soil erosion.

→ Biogeochemical cycles: The cycles in nature which keep replenishing the various natural resources in atmosphere and on the earth’s crust are called biogeochemical cycles.
a. Water-cycle: It is the constant exchange of water among the air, land and sea and between living organisms and their surroundings. 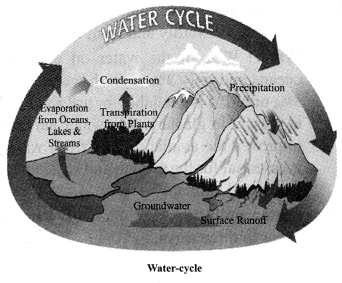 b. Nitrogen-cycle: Nitrogen, an important nutrient for all life forms, is circulated through the living and non-living components of the biosphere through various processes like nitrogen fixation (by nitrogen fixing bacteria), ammonification, nitrification and denitrification. 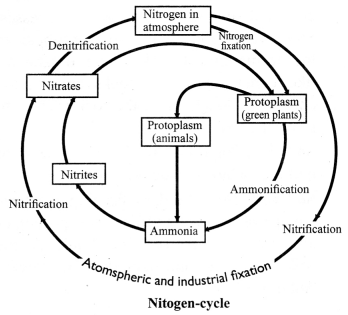 c. Carbon-cycle: Carbon is incorporated into life forms by the process of photosynthesis and returns to the atmosphere through respiration, decomposition, combustion, etc. 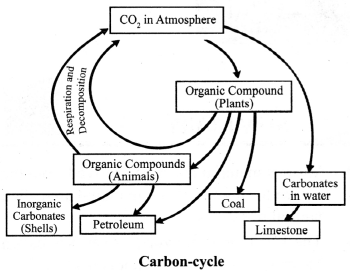 d. Oxygen-cycle: Green plants release oxygen by photosynthesis which is cycled during combustion and respiration. 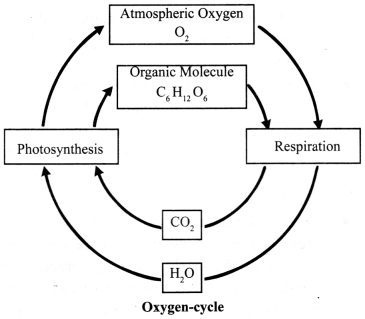 → Greenhouse effect: Greenhouse gases like CO2, CH4, etc., trap the solar energy and keep the earth warm. This is called greenhouse effect. However, excess of such gases in atmosphere results in heating up of the earth and increase the average temperature across the globe. This is called global warming which has numerous ill-effects like melting of glaciers, floods, draughts, etc.

→ Ozone (O3): Ozone layer is present like a blanket around the earth in the stratosphere. It absorbs the harmful UV radiations from the sun and hence protects us. However, the presence of compounds like CFCs in the atmosphere depletes the amount of ozone. An ozone hole, formed by thinning of ozone, is found over Antarctica. Hence, there is a need to take precautionary measures and lifestyle changes to conserve and procure the nature.