→ All organisms consist of tiny building blocks which are known as cells. The term ‘cell’ was coined by Robert Hooke from the Latin word ‘cella’ which means a Tittle room’.

→ Cell is the basic structural and functional unit of all organisms. Cell is the lowest level of organisation that is ‘alive’.

→ Cell theory states that: All living organisms are composed of cells. Cell is the fundamental unit of life. All new cells arise from pre-existing cells.

→ Shape and size of cells: Cells vary in shape and size. They may be oval, spherical, rectangular, spindle shaped or totally irregular like the nerve cell. The size of cells also varies in different animals and plants. Most of the cells are very small in size, like red blood cells (RBCs), while some cells are fairly large, like nerve cells. Average size of a cell varies from 0.5 to 20 pm.

→ Cell Structure: Cell is a compound of same basic constituents.
1. Plasma membrane: Plasma membrane is the covering of the cell that separates the contents of the cell from its external environment. It is the living part of a cell. It is a very thin, delicate, elastic and selectively permeable membrane. As it is a selectively permeable membrane, it allows the flow of certain selected substances in and out of the cell. The plasma membrane is flexible and is made up of organic molecules called lipids and proteins. The flexibility of cell membrane also enables the cell to engulf food and other materials from its external environment. Such process is known as endocytosis. It is observed in Amoeba.

→ If the medium surrounding the cell has a higher water concentration than the cell, the cell will gain water by osmosis. Such a solution is known as a hypotonic solution. → Cell wall: Cell wall is a non-living, thick and freely permeable covering made up of cellulose. It is available in eukaryotic plant cells and in prokaryotic cells as well. It determines the shape of the cells. It protects the plasma membrane. It prevents desiccation or dryness in cells. It helps in the transport of various substances in and out of the cell.

→ Nucleus: Nucleus is covered by a double¬layered membrane. The fluid inside the nucleus is called nucleoplasm. Nucleus consists of chromosomes which are important for the functioning of a cell. Chromosomes consist of genes which are the carriers of genetic information. Nucleus controls all the metabolic activities of the cell. It is the storehouse of genes. Without nucleus, cell can neither survive nor show specialised activities.

→ Type of cells: The cells can be categorised in two types: Protoplasm stores vital chemicals like amino acids, proteins, sugar, etc. It is the site of some metabolic reactions. 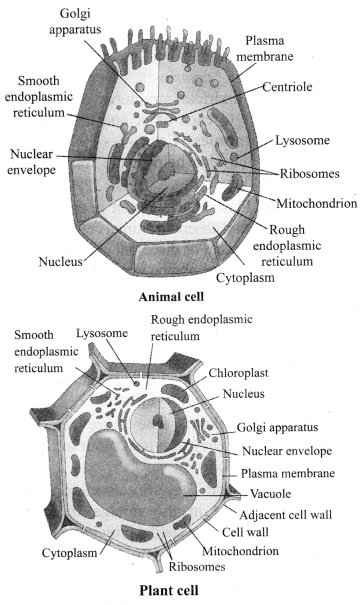 → Cell organelles: These are small membrane bound structures suspended in the cytoplasm. They perform lots of chemical activities to support the structure and functioning of a cell. Some cell organelles are described below:
1. Endoplasmic Reticulum: Endoplasmic reticulum is a mesh-like structure which is composed of numerous tubes. It extends from the plasma membrane to the nuclear membrane. There are two types of endoplasmic reticulum, viz, smooth ER (synthesises lipids, detoxify drugs) and rough ER (synthesises proteins). Rough ER has ribosomes on its surface which give it the characteristic rough appearance.
It serves as the transport channel in the cell. Substances are transported from cell membrane to cytoplasm and to nucleus and vice-versa. ER also serves the role of packing many substances in the cell. It helps in the formation of plasma membrane and Golgi-bodies. Smooth ER helps in synthesis and transport of lipids. 2. Golgi body: The Golgi apparatus, first described by Camillo Golgi, consists of a system of membrane-bound vesicles arranged approximately parallel to each other in stacks called cistemae. The materials synthesised near the ER are packaged and dispatched to various targets inside and outside the cell through the Golgi apparatus. The Golgi bodies store, modify, pack and dispatch the substances. They help in the formation of lysosomes. 3. Lysosomes: Lysosomes are small sac-like structures. They are derived from Golgi complex. Lysosomes contain digestive enzymes. They are found in eukaryotic cells, mostly in animals. Lysosomes help in digestion of foreign substances and wom-out cell organelles. They provide protection against bacteria and vims. They help to keep the cell clean. During the distribution in cellular metabolism, e.g., when they get damaged, lysosomes may burst and the enzymes digest their own cell. Therefore, lysosomes are also known as suicidal bags of a cell.

5. Mitochondria: Mitochondria are small sausage-shaped organelles. It is a double-membrane structure. Outer membrane is smooth whereas inner membrane is projected into numerous finger-like structures called cristae. Mitochondria contain their own DNA and ribosomes. They provide energy for the vital activities of living cells. They produce energy due to chemical reactions, in the form of ATPs (Adenosine Triphosphate – energy currency of the cell). Therefore, it is called ‘powerhouse of the cell’. 6. Centrosome and centrioles: Centrosome is found only in eukaryotic animal cells. It is not bounded by any membrane but consists of centrioles. Centrioles are hollow cylindrical structures arranged at right angle to each other and are made up of microtubules. Centrioles help in cell division and also help in the formation of cilia and flagella.

7. Plastids: Plastids are present in most of the plant cells and absent in animal cells. They are usually spherical or discoidal in shape. These are double membrane bound organelles. Plastids also have their own DNA and ribosomes. Plastids are of three types:

8. Vacuoles: Vacuoles are fluid filled chambers and are often seen in many cells. Vacuoles are very large in plant cells. A plant cell usually has a single but large central vacuole. Such a vacuole fills almost the entire space inside the cell. Vacuoles are much smaller and few in number in animal cells.
Cell division: A cell divides by one of the following two processes:
i. Mitosis: Each cell divides into two daughter cells and each new cell has same number of chromosomes as the mother cell.

ii. Meiosis: Each cell divides into four daughter cells, each having half the number of chromosomes as the mother cell.