Question 1.
Okay, granted that we can’t live without political parties. But tell me on what grounds do people support a political party?
Answer:
There is nothing wrong with any of the political parties. It is we people who have power in a democracy. So, if we are right in our thought and action, the parties will have to work accordingly. They simply represent what we are. They also come from our society. We have ballots in our hands which give them life.

Question 2.
The inspiration behind the following imaginary narrative is Shri Kishen Patnaik (1930-2004), also known as Kishenji. He was elected as a Member of Parliament from Sambalpur, Odisha in 1962. What did Kishenji mean by an alternative political formation? The question came up in a conversation between Sudha, Koruna, Shaheen and Gracy. All four women had led very powerful people sovements in different parts of the country. They were meeting in a village in Odisha, away from their day-to-day struggles, to think afresh the future ofpeople s movements.

The discussion naturally turned to Kishenji, who was regarded as a friend, political philosopher and moral guide by all the movement groups in the country. He had argued that people’s movements should embrace politics openly. His argument was simple yet powerful. Movements focused on a  single issue are suitable as long as we wish to achieve limited changes in a  articular aspect of life. But if we wish to bring about a fundamental social transformation, or basic change even in one aspect of life, we would need a political organisation. People s movement must establish a new political formation to act as a moral force in politics.

This was an urgent task, he said, because all the existing political parties had become irrelevant for social transformation. “But Kishenji never clarified what that organisation will be. He talked of an alternative political formation or a third force in politics.But did he mean a political party?” said Gracy. She felt that an old style political party mas not the right instrument for social change. Sudha agreed with her. “I have thought about it several times. I agree that all the struggles that we are involved with – the struggle against displacement, against globalisation, against caste and gender oppression and for an alternative kind of development – all this is political. But the moment we form a party, all the goodwill we have earned all these years will be lost. People will think of us as no different from other politicians. “Besides”, added Karuna, we have seen that a lot can be achieved by putting pressure on the existing political parties.

We tried putting up candidates in panchayat elections, but the results were not very encouraging. People respect our work, they even adore us, but when it comes to voting they go for the established political parties. Shaheen did not agree with them Let us be very clear. Kishenji wanted all the people’s movements to forge a new political party. Of course he wanted this party to be a different kind of a party. He was not for political alternatives, but for an alternative kind of politics.” Kishenji is no more. What would be your advice to these four activists? Should they form a new political party? Can a political party become a moral force in politics? What should that party be like?
Answer:

Question 4.
Why don’t parties give enough tickets to women? Is that also due to lack of internal democracy?
Answer:

Question 5.
Can you identify which of the challenges described in this section are being highlighted in these cartoons (on page 83 to 85). What are the ways to curb the misuse of money and muscle power in politics? 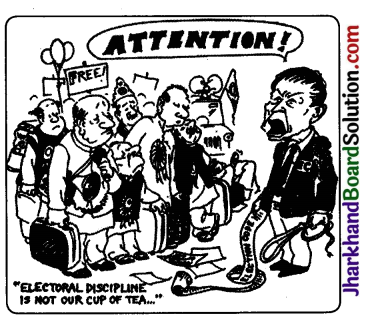 Answer:
The cartoons highlight the challenge of the frequent use of money and muscle power in politics shown by the political parties.

Question 6.
Do you agree that this form of reforming political parties will be acceptable to them?
Answer:
We hope so because this is good not only for them but also for the democracy. They all are meant for strengthening democracy. They also feel the need for reformation. A fair politics will be appreciated by all the parties.

(ii) Parties put forward different policies and programmes and the voters choose from them. Each of us may have different opinions and views on what policies are suitable for the society. But no government can handle such a large variety of views. In a democracy a large number of similar opinions have to be grouped together to provide a direction in which policies can be formulated by the governments.

(iii) Parties play a decisive role in making laws for a country. Laws are debated and passed in the legislature. But since most of the members belong to a party, they go by direction of the party leadership irrespective of their personal opinions.

(iv) Parties form and run governments:
The big policy decisions are taken by the political executives who come from the political parties.

(v) Parties select leaders, train them and then make them ministers to run the government in the way they want.

(vii) Parties shape public opinion:
They raise and highlight issues. Parties have lakhs of members and activists spread all over the country. Many of the pressure groups are the extensions of political parties among different sections of society. Parties sometimes also launch movements for solving of problems faced by the people. Often opinions in the society crystallise on the lines parties take.

(viii) Parties provide people access to government machinery and welfare schemes implemented by governments. For an ordinary citizen it is easy to approach a local party leader than a government officer. That is why they feel close to parties even when they do not fully trust them.

(ii) Dynastic succession is related to the first one. Since most political parties do not practise open and transparent procedures for their functioning, there are very few ways for an ordinary worker to rise to the top in a party. This keeps the parties deprived of apt leadership.

(iii) Growing role of money and muscle power in parties, especially during elections. Since parties are focussed only on winning elections, they tend to use short-cuts to win elections. They tend to nominate those candidates who have or can raise lots of money.

Question 3.
Suggest some reforms to strengthen parties so that they perform their functions well.
Answer:
Many suggestions are often made to reform political parties:

Question 4.
What is a political party?
Answer:
A political party is a group of people who come together to contest elections and hold power in the government. They agree on some policies and programmes for the society with a view to promote the collective good.

Question 6.
A group of people who come together to contest elections and hold power in the government is called a …………
Answer:
Political Party

Question 7.
Match List 1 (organizations and struggles) with List II and select the correct answer using the codes given below the lists:

Question 8.
Who among the following is the founder of the Bahujan Samaj Party?
(a) Kanshi Ram
(b) Sahu Maharaj
(c) B. R. Ambedkar
(d) Jyotiba Phule
Answer:
(a) Kanshi Ram

Question 10.
Consider the following statements on parties:
A. Political parties do not enjoy much trust among the people.
B. Parties are often rocked by scandals involving top party leaders.
C. Parties are not necessary to run governments.
Which of the statements given above are correct?
(a) A, B and C
(b) A and B
(c) B and C
(d) A and C
Answer:
(b) A and B

Question 11.
Read the following passage and answer the questions given below:
Muhammad Yunus is a famous economist of Bangladesh. He received several international honours for his efforts to promote economic and social development for the benefit of the poor. He and the Grameen Bank he started jointly, received the Nobel Peace Prize for the year 2006. In February 2007, he decided to launch a political party and contest in theparliamentary elections. His objective was to foster proper leadership, good governance and build a new Bangladesh. He felt that only a political party different from the traditional ones would bring about new political culture. His party would be democratic from the grassroots level.

The launching of the new party, called Nagarik Shakti (Citizen’s Power) has caused stir among the Bangladeshis. While many welcomed his decision, some did not like it. “Now I think Bangladesh will have a chance to choose between good and, bad and eventually have a good government, ” said Shahedul Islam, a government official. “That government, we hope, would not only keep itself away from corruption but also make fighting corruption and lack money a top priority. ” But leaders of traditional political parties who dominated the country s politics for decades were apprehensive. “There was no debate (over him) winning the Nobel, but politics is different – very challenging and often controversial, ” said a senior leader of the Bangladesh Nationalist Party.

Some others were highly critical. They asked why he was rushing politics. “Is he being planted in politics by mentors from outside the country, ” asked one political observer. Do you think Yunus made a right decision to float a new political party? Do you agree with the statements and fears expressed by various people? How do you want this new party organised to make it different from other parties? If you were the one to begin this political party how would you defend it?
Answer:

(i) Yes, Yunus’s decision to float a new political party is right and appreciable.

(ii) I agree with the statement of the government official, Shahedul Islam that the launch of this new party may change the political culture of the country. But I don’t agree with the fear of the senior leader of Bangladesh Nationalist Party.

(iii) (1) It should be democratic from very grassroots level.

(2) It should have equal place for rich and poor, men and women, educated and non- educated, rural and urban people without any discrimination.

(3) It should draft policies which keep the society integrated and take the country towards development.

(iv) (1) The floating of such a party is necessary because the existing parties have moved away from carrying their democratic responsibilities.

(2) Instead of strengthening democracy, they are just taking it as a means to amass wealth.

(3) This party is being launched to foster proper leadership, good governance and build a new Bangladesh.

(4) It is going to bring about a totally new political culture, more democratic and more transparent.