Question 2.
Can you name some such types of farmings?
Answer:
Jhumming: The ‘slash and burn’ agriculture is known as ‘Milpa’ in Mexico and Central America, ‘Conuco’ in Venzuela, ‘Roca’ in Brazil, ‘Masole’ in Central Africa, ‘Ladang’ in Indonesia, ‘Ray’ in Vietnam. In India, this primitive form of cultivation is called ‘Bewar’ or ‘Dahiya’ in Madhya Pradesh, ‘Podu’ or ‘Penda’ in Andhra Pradesh, ‘Pama Dabi’ or ‘Roman’ or Bringa’ in Odisha, ‘Kumari’ in Western Ghats, ‘Valre’ or ‘Waltre’ in South-eastern Rajasthan, ‘Khil’ in the Himalayan belt, ‘Kuruwa’ in Jharkhand, and ‘Jhumming’ in the Northeastern region.

Question 3.
Rinjha lived with her family in a small village at the outskirts of Diphu in Assam. She enjoys watching her family members clearing, slashing and burning a patch of land for cultivation. She often helps them in irrigating the fields with water running through a bamboo canal from the nearby spring.

Question 4.
Can you enlist some crops which are grown in such farming?
Answer:
Crops such as jowar, millet, cassava, com, beans, etc. are grown.

Question 6.
Can you give some more examples of crops which may be commercial in one region and may provide subsistence in another region?
Answer:
While wheat is grown on a large scale as a commercial crop in Punjab, Haryana and Uttar Pradesh, it is grown as a subsistence crop in eastern states like Bihar and West Bengal.

Question 7.
List the items w hich are made of rubber and are used by us.
Answer:
Rubber is an important industrial raw material. It is used for a variety of purposes 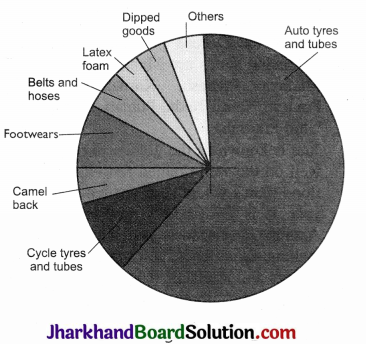 Question 9.
Change in cropping patterns, for example, from cereals to high-value crops will mean that India will have to import food. During 1960s this would have been seen as a disaster. But if India imports cereals while exporting high-value commodities, it will be following successful economies like Italy, Israel and Chile. These countries export farm products (fruits, olives, especially seeds and wine) and import cereals. Are we ready to take this risk? Debate the issue.
Answer:
Self-help.
Hints:

(iii) Which one of the following is a leguminous crop?
(a) Pulses
(b) Jowar
(c) Millets
(d) Sesamum
Answer:
(a) Pulses

Question 2.
Answer the following questions in 30 words.
(a) Name one important beverage crop and specify the geographical conditions required for its growth.

(b) Naitte one staple crop of India and the regions where it is produced.

(c) Enlist the various institutional reform programmes introduced by the government in the interest of farmers.

(d) The land under cultivation has got reduced day by day. Can you imagine its consequences?
Answer:
(a) Tea is an important beverage crop. It grows well in tropical and sub-tropical climates having deep and fertile well- drained soil, rich in humus and organic matter. Tea bushes require warm and moist frost-free climate all through the year. Frequent showers evenly distributed over
the year ensure continuous growth of tender leaves. It is processed within the tea garden to restore its freshness.

(b) Rice is a staple crop of a majority of the people in India. It is grown in the plains of north and north-eastern India, coastal areas and the deltaic regions. Development of dense network of canal irrigation and tube wells has made it possible to grow rice in the areas of less rainfall, such as Punjab, Haryana and western Uttar Pradesh and parts of Rajasthan.

(c) The Government of India introduced several institutional reforms for the benefit of the farmers and agriculture of India. Land reform was the main focus of our first five year plan. Collectivisation, consolidation of land holdings, cooperation and abolition of zamindari, etc. were given priority to bring institutional reforms in the country after Independence. 1980s and 1990s a land development programme was initiated, which included both institutional and technical reforms.

(d) The competition for land between non- agricultural uses such as housing, etc. and agriculture has led to reduction in net sown area. This will lead to shortage of food. Food is a basic need and every citizen of the country should have access to food which provides minimum nutritional balance. There will be a huge pressure on the country’s future food security.

(b) Globalisation has been existent since the time of colonisation of India. After the 1990s, the Indian farmers have been exposed to new challenges as they are not able to compete with the developed countries because of the highly subsidised agriculture in those countries.

A fewveconomists think that Indian farmers have a bleak future if they keep growing foodgrains on small landholdings for ever increasing population. Despite being an important producer of rice, cottbn, rubber, tea, coffee, jute and spices, the agricultural products are unable to face the stiff competition.

Overuse of chemicals, dying aquifers and vanishing diversity has led to land degradation. It is said that Green Revolution is responsible for it.Farmers should adopt to genetic engineering, which is recognised as a powerful supplement in inventing new hybrid varieties of seeds. Organic farming has become popular. Indian farmers should diversify their cropping pattern from cereals to high-value crops. This will increase income and reduce environmental degradation simultaneously.

(c) Rice is a kharif crop. It requires high temperature, above 25°C and high humidity with annual rainfall above 100 cm. In the areas of less rainfall, it grows with the help of irrigation. Rice grows well in the plains of north and north¬eastern India, coastal areas and the deltaic regions. Development of dense network of canal irrigation and tube wells has made it possible to grow rice in the areas of less rainfall, such as, Punjab, Haryana, and western Uttar Pradesh and parts of Rajasthan.

Question 1.
Group discussion on the necessity of literacy among farmers.
Answer:
Self-help Hints: Solve the puzzle by following your search horizontally and vertically to find the hidden answers.

Question 2.
This is the summer cropping season of India.
Answer:
Kharif

Question 4.
It is a coarse grain.
Answer:
Jo war

Question 6.
One of the four major fibres grown on black soils.
Answer:
Cotton