Question 3.
The five kingdom classification is based on the complexity of
(a) mode of nutrition
(b) body organisation
(c) cell structure
(d) all of these
Answer:
(d) Arthropoda

Question 4.
Which one of the following belongs to coelenterata?
(a) Sycon
(b) Hydra
(c) Spongilla
(d) Planaria
Answer:
(b) Hydra

Question 5.
In which of the following are the reproductive organs hidden?
(a) Cryptogamae
(b) Phanerogamae
(c) Gymnosperms
(d) Angiosperms
Answer:
(a) Cryptogamae

Question 8.
What is the phylum of octopus?
(a) Arthropoda
(b) Mollusca
(c) Annelida
(d) Cnidaria
Answer:
(b) Mollusca

Question 10.
In which organism do flame cells form the excretory system?
(a) Flatworm
(b) Earthworm
(c) Insect
(d) Crab
Answer:
(a) Flatworm

Question 15.
After studying the characteristics of Agaric us, Madan noted them as follows:
I. It is fleshy.
II. It has an umbrella-like cap called pileus.
III. Spores are produced by the stipe.
IV. Its body is made of filaments.
Which observation is not correct?
(a) I
(b) II
(c) III
(d) IV
Answer:
(c) III

3. Assertion: Snake and turtle belong to the same group.
Reason: Both the snake and the turtle are cold – blooded and have four – chambered heart.
Answer:
(C) The assertion is true but the reason is false.

Question 1.
What is evolution?
Answer:
Evolution is the gradual unfolding of organisms, from the pre – existing ones, through changes since the beginning of life.

Question 3.
What is lichen?
Answer:
Lichens are a complex life form that is a symbiotic partnership of two separate organisms, i.e., a fungus and an alga The alga can be either a green alga or a blue-green alga (also known as cyanobacteria).

Question 4.
What is a symbiotic relationship or symbiosis?
Answer:
It is a relationship between two organisms in which both of them are benefited, e.g., in the symbiotic association of lichens, fungi get food from blue – green algae and in return, blue-green algae get shelter.

Question 6.
What is biodiversity?
Answer:
Different forms of living organisms found in a particular region is known as biodiversity of that region.

Question 7.
Define species.
Answer:
A species includes all organisms that are similar enough to interbreed and perpetuate naturally.

Question 8.
Define mycoplasma.
Answer:
Mycoplasma are the smallest and the simplest organisms. They are prokaryotes having a nucleoi(d) Their body can change shape easily. They are heterotrophs.

Question 9.
Define ‘taxonomy’.
Answer:
The branch of science that classifies living organisms among different categories or groups is called taxonomy. Taxonomy is the science of identifying and naming species and organising them into systems of classification.

Question 10.
Define Taxon.
Answer:
A taxon is a unit of classification of organisms which can be recognised to a definite category at any level of classification, for e.g., fishes, birds, insects, etc.

Question 14.
What is thallus?
Answer:
Thallophytes have a simple plant body. The plant body is not differentiated into root, stem and leaves and is called thallus.

Question 17.
The external features of some living organisms are given below as I, II, III and IV. Read these and write the name of their respective animal phylum or class.
I. Streamlined body, covered with scales and divided externally into head, trunk and tail.
II. Skin is dry, covered with epidermal scales and bear two pairs of limbs each with five toes ending in horny claws.
III. Body is externally segmented and covered with a thick exoskeleton made up of chitin. The segments are grouped to form head, thorax and abdomen.
IV. Body is flattened, leaf-like or ribbon – like and bilaterally symmetrical.
Answer:
I – Phylum chordata (superclass pisces)
II – Phylum chordata (class reptilia)
III – Phylum arthropoda
IV – Phylum platyhelminthes

Question 18.
An animal is described as worm-like with unsegmented body and shows some features of  invertebrates and some of chordates. Identify the described animal.
Answer:
The animal is Balanoglossus.

Question 19.
Atrip to Himalayan foothills was organised by the school of Raman and Riya During the trip, they noticed tall trees having needle – like leaves and cones. Name the trees Raman and Riya saw there.
Answer:
They saw Pinus trees.

Question 2.
Write the hierarchy of classification proposed by Linnaeus.
Answer:
The hierarchical categories are as follows:

Question 3.
What are the characteristics of kingdom Monera?
Answer:

Question 4.
Why are blue green algae included under Monera and not under Plantae?
Answer:
Monera is a kingdom of prokaryotes while organisms of kingdom Plantae shows a definite nucleus, membrane- bound organelles and multicellular body design. Blue green algae are prokaryotes having nucleoid with naked DNA. The cell organelles are also not enclosed within a membrane. As they also do not possess multicellular body design, these characteristics bring them closer to Monera and exclude them from the kingdom Plantae.

Question 8.
How are angiosperms further divided?
Answer:
Angiosperms are divided into two groups on the basis of the number of cotyledons present in the seeds.

Question 12.
Identify the different parts A, B, C and D of fern plant shown in the figure given below. 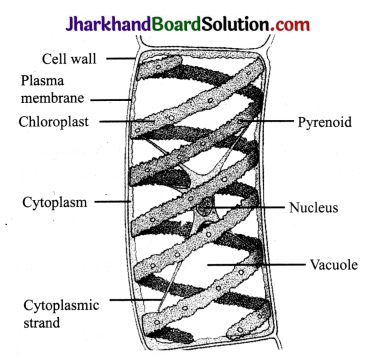 Question 15.
Define pteridophytes.
Answer:
Pteridophytes are vascular cryptogams and are the first vascular land plants. The main plant body is the saprophyte, which is differentiated into true roots, stems and leaves. Their xylem lacks companion cells. They have specialised tissue for the conduction of water and other substances from one part of the plant body to another. Examples: Mars ilea, ferns and horse tail.

Question 16.
Define coelom.
Answer:
Coelom is a cavity which lies in between the body wall and gut (alimentary canal) and is lined by mesodermal cells. It allows greater body flexibility. In it, the organs of the body can accommodate in a better way.

Question 21.
Give the general characteristics of Platyhelminthes.
Answer:

Question 22.
Give the characteristics of Arthropoda with two examples.
Answer:

Question 23.
Give the characteristics of Echinoder – mata.

Question 25.
Give the characteristics of phylum Annelida.

Question 27.
You are given leech, Nereis, Scolopendra, prawn and scorpion and all have segmented body organisation. Will you classify them in one group? If no, give the important characteristics based on which you will separate these organisms into different groups.
Answer:
Leech, Nereis, Scolopendra, prawn and scorpion belong to different groups.

Question 28.
Sakshi’s younger brother frequently suffered from stomach ache and vomiting. Her mother took him to a clinic for treatment. Doctor advised for a stool test before prescribing some medicines. The report diagnosed that the stool is infected with common roundworms. Answer the following questions asked by Sakshi to the doctor:
(a) What are common roundworms?
(b) Are there any other worms that live as parasites in our body and cause diseases?
(c) How do roundworms enter our body? What can be done to prevent such infections?
Answer:

Question 1.
Describe the three basic features for grouping all organisms into five major kingdoms.
Answer:
Basic criteria such as nature of cell, cellularity and mode of nutrition were used by Whittaker to classify the living organisms into five kingdoms,
(a) Nature of cell relates to the pres – ence or absence of membrane bound organelles in it. On the basis of this category, we can clas¬sify the living organisms in two broad categories prokaryotes and eukaryotes.

(c) Mode of nutrition categorises all living organisms into autotrophs and heterotrophs. Euglena is a dual organism because of its mode of nutrition. It can act as both an autotroph (makes its own food) as it contains chlorophyll and heterotroph (feeds on other substances). Also, in presence of excess organic matter or darkness, it can act as a saprophytic organism. So, as it shows features of both plants and animals, it is a dual organism.

Question 2.
Give the outline classification of animal kingdom upto the level of phyla Question 3.
What are the differences between plants and animals?
Answer:

Question 5.
Give the classification of plant kingdom.

Question 7.
Observe the plant given below and answer the questions that follow.
1. Identify the plant and name the phylum it belongs to.
2. What is its habitat?
3. List any two of its special features.
4. How does transport of substances take place in this plant?
Answer:

Find out the scientific names of the following animals and plants:
(a) Frog
(b) Peacock
(c) Human
(d) Neem
(e) Maize
(f) Honeybee

Observations
It is difficult to remember names of a species in different languages. There was a need for some system to create uniform naming convention.

Question 1.
Many medicinal plants are getting extinct every year. A group of students who had gone for educational trip clicked photographs of endangered plants. These photographs were used by the school laboratory to study these plants.
1. Name two endangered plants.
2. Name any one medicinal plant and write its medicinal use.
3. What value of students is reflected in the above act?
Answer:

Question 2.
Due to global warming, coral is getting diminished in all the oceans/water bodies. People in the Lakshadweep island protect their corals by not allowing people/tourists to take few pieces away.
1. Name the phylum of coral.
2. What is coral made up of?
3. What values of people in Lakshadweep island are reflected?
Answer: