Question 15.
The figure shows the displacement time graph of a body moving in a straight line. The velocity of the body during the 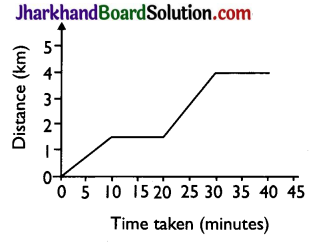 Question 17.
Four cars A, B, C and D are moving on a levelled road. Their distance versus time graphs are shown here. Choose the correct statement. 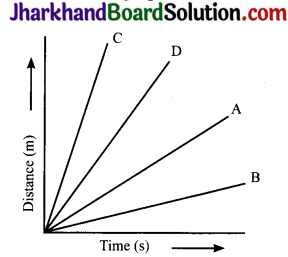 1. Assertion: Velocity is a scalar quantity.
Reason: Velocity cannot be zero.
Answer:
(D) Both the statements are false.

5. Assertion: An object under acceleration can have a uniform speed.
Reason: Both speed and acceleration are scalar quantities.
Answer:
(C) The assertion is true but the reason is false.

Question 3.
Define speed.
Answer:
It is the distance travelled by a body per unit time.
Speed. = \(\vec{a}\)

Question 4.
Define average speed.
Answer:
The total distance travelled by an object divided by the total time taken is called its average speed.

Question 5.
Define acceleration.
Answer:
It is defined as the rate of change of velocity with time.
Acceleration = \(\frac{Change in velocity}{Time Taken}\)
or a = \(\frac{v-\mathbf{u}}{t}\)
The SI unit of acceleration is m/s2. Question 7.
With the help of a distance – time graph show that the object is stationary.
Answer: Question 11.
What is the SI unit of displacement?
Answer:
Metre (m). Question 18.
Express the velocity of a body in uniform circular motion in terms of its time period T.
Answer:
Suppose a body of mass m rotates in a circle of radiusr with velocity v. It completes one revolution in time T. Then,
Velocity = \(\frac{Distance}{Time}\)[/latex] = \(\frac{Circumference}{Time period }\)[/latex]
or v = \(\frac{2 \pi \mathrm{r}}{\mathrm{T}}\)

Question 19.
The cars A, B, C and D are moving on a levelled road. Their distance versus time graphs are shown in the figure. Which car is the slowest?
Answer:
Speed = Slope of distance – time graph. The smaller the slope, the smaller is the speed From the given figure, slope is minimum for car D. So, D is the slowest car.

Question 21.
A vehicle is moving at a constant velocity of 10 km/h in the north – south direction. It turns and starts moving towards east. What is the velocity of the vehicle towards east before taking the turn?
Answer:
Zero. The component of velocity at right angle to the original direction of motion is zero.

Question 3.
Give some examples of straight line motion.
Answer:
Examples:

2. So the position of an object can be fully described by knowing:

In the figure shown below, the position of an object located at point P is 6 cm from the origin and 30° north of east. v (Scale: 1cm = 1m) Question 5.
A body moves in a circle of radius ‘2R’. What is the distance covered and displacement of the body after 2 complete rounds?
Answer:
Distance covered after 2 complete rounds = 2 × circumference
= 2 × 2π (2R) = 8πR
Displacement = zero, because initial and final positions of the body are the same and displacement is the shortest distance between initial and final positions.

Question 6.
Define the term velocity. What is its SI unit? Is it a scalar or a vector quantity?
Answer:
Velocity is a physical quantity that gives both speed and direction of motion of the body.
Definition: Velocity of a body is defined as the displacement produced per unit time. Velocity is also defined as the speed of a body in a givendirection. If ‘s’ is the distance travelled by a body in a given direction and ‘t’ is the time taken to travel that distance, then the velocity V is given by,
Velocity = \(\frac{Displacement}{Time}\)[/latex]
SI unit of velocity is m/s. Velocity is a vector quantity because it requires both magnitude and direction of a body.

Question 7.
Give the difference between distance and displacement.

Question 14.
Show that the slope of distance – time graph gives velocity of the body. Question 16.
Draw velocity – time graph for a body moving with uniform velocity. Hence show that the area under the velocity time graph gives the distance travelled by the body in a given time interval.
Answer:
In the given figure, line PQ is the velocity – time graph of a body moving with a uniform velocity such that OP = v Area of rectangle ABCD = AD × AB
= OP × AB
= v × (t2 – t1)
= Velocity × Time
= Distance travelled in time interval (t2 – t1) Hence, the area under the velocity – time graph gives the distance travelled by the body in the given time interval. Question 19.
The table given below shows distance (in km) travelled by bodies A, B and C. Read the data carefully and answer the following questions.

Question 3.
Explain the difference regarding the nature of acceleration of the three moving bodies as expressed by the following velocity – time graphs: Question 1.
The speed limits are prescribed for vehicles running on highways. Why is it essential to follow the speed limit rules?
Answer:
Speed limits are prescribed on the highways/expressways because:
1. When a vehicle is made to run at height speeds, its tyres get hot (due to friction). This makes them softer and the air inside the tubes hotter Both. these factors may lead to bursting of tyre/tube.

2. Reflex time varies from person to person. Any running vehicle needs a certain time period to stop after the brakes are applied. At higher speeds, this time period becomes shorter.

3. As a result, the chances of collision increase. Because of these reasons, one should strictly follow the speed limit regulations. Also, it is safer to drive in your lane depending upon the speed of your vehicle.

4. Moral: Drive below the speed limit and in your lane.

Question 2.
Most drivers involved in road accidents are found to be drunk. Give reason.
Answer:
The reflex time of a person increases when drunk, (average reflex time of a normal person is about 1/15s). Therefore, such a driver of vehicle will take more time in applying brakes. As a result, the vehicle may not stop well in time and cause an accident.