→ In 430 B.C., Democritus postulated that matter is made up of very small particles calLed “Atomos’ which means ‘indivisible’. Later, Antoine Lavoisier, from his experimental observations, established the laws of chemical combinations.

→ After a series of experiments, Dalton concluded that all matter must be composed of tiny particles, which cannot be further divided. He called them atoms.

→ Elements and symbols: Dalton proposed a scheme of notation to represent elements.

→ Molecule: A molecule is a group of two or more atoms that are chemically bonded together and form the smallest part of an element or a compound. This can exist independently and shows all the properties of that substance.

→ Atomicity: The number of atoms constituting a molecule is referred to as its atomicity. Molecules of an element constitute same type of atoms. They may be monoatomic, diatomic or polyatomic. 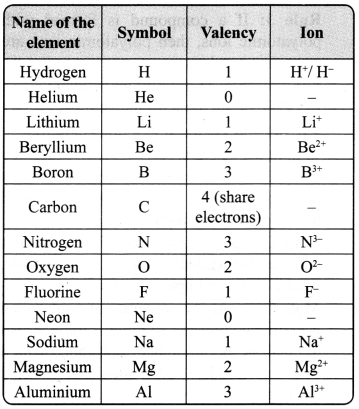 → Chemical Formulae: The chemical formula of a compound is a symbolic representation of its composition.
Rule 1: Cross multiply the valency of elements to form a compound.

Rule 2: If compound consists of both metal and non-metal, then metal is written first. For example: In calcium chloride (CaCl2) and zinc sulphide (ZnS), Calcium and Zinc are metals, so they are written first, whereas chloride and sulphide are non-metals.

Rule 3: If a compound is formed with polyatomic ions, then polyatomic ions are written in brackets.
For example: In aluminium sulphate [Al2(SO4)3], the polyatomic sulphate ion, SO42- is enclosed in a bracket before writing the subscript 3.
Here, the bracket with a subscript 3 indicates that three sulphate groups (SO42-) are joined to two aluminium atoms.

Note: Compounds made up of a metal and a non-metal are called salts or ionic compounds. All the above examples are of salts.