4. Which of the following in the Brahmaputra river is the largest inhabited riverine island in the world?
(a) Andamans
(b) Lakshadweep
(c) Majuli
(d) Nicobar
Answer:
(c) Majuli

Question 2.
Name the highest mountain range of the world.
Answer:
The Himalayas.

Question 3.
Write the expansion of the Himalayas.
Answer:
The Himalayas mountain ranges run in a West-East direction from the Indus to the Brahmaputra.

Question 4.
Which is the northern-most range of the Himalayas?
Answer:
The Himadri.

Question 6.
Name the most rugged range of the Himalayas.
Answer:
The Himachal.

Question 7.
Name the sub-ranges of the Himachal Himalayas.
Answer:
The sub-ranges are named as (i) Pir Panjal, (ii) Dhauladhar and (iii) Mahabharat.

Question 9.
What are Shiwalik ranges made of?
Answer:
Shiwalik ranges are composed of unconsolidated sediments brought down by rivers from the main Himalayan ranges.

Question 10.
Name the longitudinal divisions of the Himalayas.
Answer:

Question 11.
By which rivers the northern-most boundary of the Himalayas formed?
Answer:
The Brahmaputra.

Question 12.
By which name are the mountains spread along the eastern boundary of India- known?
Answer:
Purvachal.

Question 13.
Name the hills running through the Purvachal.
Answer:

Question 17.
Into how many sections are the northern plains divided?
Answer:

Question 18.
What is Bhabar?
Answer:
The plains formed by the rivers, after descending from the mountains deposit pebbles in a narrow belt lying parallel to the slopes of the Shiwaliks are known as Bhabar.

Question 19.
What is Terai?
To the south of Bhabar belt, the streams and rivers re-emerge and create a wet, swampy and marshy region known as Terai.

Question 22.
Which is the ancient landmass of India?
Answer:
Peninsular region.

Question 23.
Name the North-East extensions of the Deccan Plateau.

Question 28.
What is the Deccan Trap?
Answer:
The black soil area of the western peninsular plateau is known as Deccan Trap.

Question 31.
Which Indian coastal part is called Konkan?
Answer:
The nor’ hern part of the Indian Western Coast is known as Konkan.

Question 34.
Where is the Chilika Lake located? Why is it famous?
Answer:
The Chilika Lake lies in the state of Odisha, to the South of the Mahanadi delta. It is the largest salt-water lake in India.

Question 36.
Where is the administrative headquarters of Lakshadeweep situated?
Answer:
Kavaratti island.

Question 38.
What are Corals?
Answer:
Coral polyps are short-lived microscopic organisms which live in colonies in shallow, mudfree and warm water.

Question 40.
Where is the Great Barrier Reef located?
Answer:
Australia.

Question 41.
What are Barchans?
Answer:
Barchans are crescent-shaped dunes which cover larger area of deserts. They are found in the Indian desert, mainly in Jaisalmer and and near Indo-Pak boundary.

Question 3.
Describe the Himadri.
Answer:
The Himadri or the Great or the Inner Himalayas:

Question 5.
Describe the Shiwaliks.
Answer:
The Shiwaliks or the Outer Himalayas:

Question 6.
Describe the divisions of the Himalayas from west to east along with Purvachal hills.
Answer:
On the basis of the location, Himalayas can be divided as follows:
1. Western Himalayas (Punjab Himalayas):
The Western section lying between the Indus and the Sutlej is known as the Punjab Himalayas. It covers a large part of Jammu and Kashmir and a part of Himachal Pradesh. They are made up of Ladakh, Zaskar and Pir Panjal ranges.

2. Central Himalayas (Kumaon Himalayas):
The section between the Sutlej and the Kali is known as Kumaon Himalayas. They extend through the state of Uttarakhand in India, and Nepal.

4. Assam Himalayas (Purvachal):
The section between Teesta and Dihang (Tsang po) is known as the Assam Himalayas. They are made up of Patkai, Naga and Mizo Hills. These hills are mainly composed of strong sandstones.

Question 8.
Make a comparison between the Himachal Himalayas and the Shiwalik based on the following:

Answer:
The comparison between the Himachal Himalayas and the Shiwaliks on the given basis is as follows:

2. Ganga Plain:
The Ganga plain extends between Ghaggar and Teesta rivers. It spreads over the states of North India Haryana, Delhi, Uttar Pradesh and Bihar.

3. Brahmaputra Plain:
This plain lies in Assam and partly in Jharkhand and West Bengal.

2. Terai:
It is wet and marshy. It has a thick forest and a variety of wildlife.

3. Bhangar:
It is composed of older alluvium. It is formed higher up in the plains at river terraces. It is less fertile as compared to Khadar.

4. Khadar:
It is composed of newer alluvium. It is formed in the lower levels in the Plains near the river. It is very fertile.

Question 14.
Write a short note on‘Corals’.
Or
What are the types of corals?
Or
How are coral reefs formed? Describe the main features of the islands group which are of coral origin.
Answer:
Corals are short-lived microscopic organisms which live in colonies. They flourish in shallow, mud-free and warm waters. They secrete calcium carbonate. The coral secretion and their skeletons form coral deposits as reefs.
These roofs are mainly of three kinds:

Atolls are circular or horse shoe-shaped coral reefs. In India, Lakshadweep Islands are of coral origin. They cover a small area of 32 sq. km. Karavatti is the administrative headquarters of Lakshadweep. This island group has great diversity of flora and fauna. The uninhabited Pitti island has a bird sanctuary.

The Andaman and Nicobar Islands:

Question 6.
“Physiographic divisions of India are complementary to each other”. Comment the above statement.
Answer:
The Indian sub-continent consists of three structural components:

The three geographical physical divisions of India are complementary to each other and have contributed to the growth of the Indian sub-continent as an independent economic entity. The Great Mountain Wall of the North in the form of Himalayas, has provided shelter to the sub-continent against aggression. The snow covering these lofty mountains are big reservoirs of water.

The Northern Plains are sea-level fertile plains. They are well-watered by rains and possess very good irrigation facilities. They are known as the granary of India and support a very large population of India. The Great Peninsular Plateau is the stable block. It is the storehouse of various minerals like iron ore, manganese, mica, bauxite and coal. Rice1 cotton and spices are also produced in large quantities in these regions. The partially-enclosed character of the sub-continent has helped it to evolve a culture of its own.

Question 1.
Physical Features of India
1. Mountain Ranges: The Karakoram, the Zaskar, the Shivalik, the Aravali, the Vindhya, the Satpura, Western & Eastern Ghats 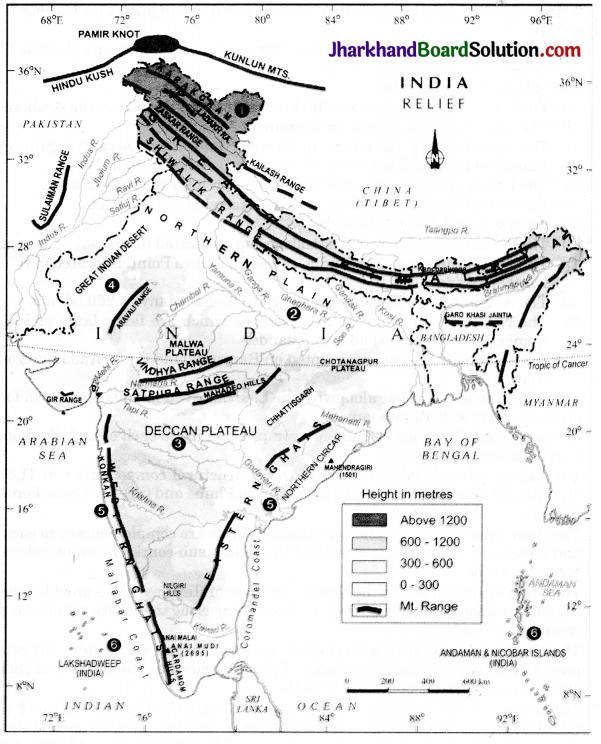