4. Which of the following lakes in Rajasthan is a saltwater lake?
(a) Siliserh
(b) Jaisamand
(c) Pichola
(d) Sambhar.
Answer:
(d) Sambhar.

Question 1.
What is drainage?
Answer:
The term drainage describes the river system of an area.

Question 3.
Which river has the largest river basin in the world?
Answer:
The world’s largest drainage basin is that of the Amazon river.

Question 6.
What do you understand by a river system?
Answer:
A group of a main river alongwith its tributaries is known as a river system.

Question 7.
From where the river Indus originates?
Answer:
The Indus rises in Tibet, near Lake Mansarovar.

Question 9.
Name the major rivers of the Indus river system.
Answer:
The Indus, the Satluj, the Jhelum, the Chenab, the Ravi and the Beas.

Question 11.
How much percent of total Indus water can be used by India according to Indus Water Treaty?
Answer:
20 per cent.

Question 12.
Name the headwater of the Ganga.
Answer:
The Bhagirathi.

Question 14.
Name the major tributaries of the Ganga.
Answer:
The Yamuna, the Ghaghara, the Gandak and the Kosi.

Question 15.
Which are the main tributaries of the Ganga that come from the Peninsular uplands?
Answer:
The Chambal, the Betwa and the Son.

Question 17.
Which is the northernmost point of the Ganga Delta?
Answer:
Farakka in West Bengal.

Question 19.
Which rivers form the Sunderban delta?
Answer:
The Ganga and the Brahmaputra.

Question 20.
By which name is the river Brahmaputra known in Tibet?
Answer:
Tsang Po.

Question 21.
What is the Sunderban famous for?
Answer:
Sunderban is famous for being the home of the Royal Bengal tiger.

Question 24.
Name the waterfall formed by the river Narmada.
Answer:
The Dhuadhar Falls.

Question 25.
Which is the largest river of the Peninsular India?
Or
Which river is also known as the ‘Dakshin Ganga’?
Answer:
The Godavari.

Question 28.
Which is the largest freshwater lake in India?
Answer:
The Wular lake (Jammu and Kashmir).

Question 31.
Where is the Sambhar Lake located? What is its use?
Sambhar Lake istuated near Jaipur in Rajasthan. Its water is used to produce salt.

Question 1.
Explain the drainage system of India through a line diagram.
Answer:

Question 7.
What do you know about Indus Water Treaty?
Answer:
Indus Water Treaty is a water-sharing treaty between India and Pakistan signed on 19th September, 1960. India can use only 20 percent of the total water carried by the Indus river system. This water is used for irrigation in Punjab, Haryana and Southern and the Western parts of Rajasthan.

Question 8.
Write a note on the Tapi basin.

Question 9.
Write a short note on the Mahanadi basin.

Question 10.
Write a note on the Krishna basin.

Question 12.
Briefly explain the National-River Conservation Plan.
Answer:
The river cleaning programme in the country was initiated with the launching of the Ganga Action Plan in 1985. The Ganga Action Plan was expanded to cover other rivers, under the National River Conservation Plan launched in the year 1995. The objective of this programme is to improve the water quality of the rivers, which are the main water sources in the country, through the implementation of pollution control measures.

Question 6.
Write a note on the Kaveri basin.
Answer:

Question 7.
Write a detailed note on the lakes of India.
Or
Lakes are of great value to human beings: Explain the statement with three examples.
Answer:
A lake is the depression filled with water on the Earth’s surface and is entirely surrounded by land. Even after being such a large country, India has comparatively fewer natural lakes. Following are the major types of lakes found in India:
1. Freshwater Lakes:
Most of the freshwater lakes are in the Himalayan region. They are of glacial origin. A glacier is one of the important agents of erosion. The erosive process of glaciers can create U-shaped valleys, and the irregular surface of a glaciated lowland in which water can accumulate. Dal lake, Bhimtal, Nainital, Loktak and Barapani are some of the important freshwater lakes of India.

2. Lakes of Tectonic Origin:
Folding and faulting produce hollows in the Earth’s crust. These hollows may contain either salt or fresh water. The Wular Lake in Jammu and Kashmir is the result of tectonic activity.

3. Saltwater Lake:
Any lake that has no natural drainage outlet, either as a surface stream or as a sustained sub-surface flow, will become saline. The Sambhar in the desert region of Rajasthan is a saltwater lake, and its water is used for producing salt.

4. Man-made Lakes or Artificial Lakes:
In order to harness water for generation of hydel power, to provide irrigation water to crops and to provide drinking water to urban places, a number of lakes have been constructed. Gobind Sagar and Govind Ballabh Pant Sagar are the two most important man-made lakes of India.

2. Development of Agriculture:
Rivers and their associated alluvial soil provide the most productive agricultural lands of the country. The Ganga-Brahmaputra basin has been formed by the two great rivers. Irrigation from rivers has been the backbone of the development of Indian agriculture.

3. Settlement:
Their valleys contains dense and concentrated settlements. Most of the large cities are located on river banks. The rivers not only provide us essential water supplies, but they also receive, dilute and transport wastes from settlements.

4. Industrial Development:
Industrial development has flourished along rivers as many industrial processes rely on water as a raw material, as a coolant and for the generation of hydro electricity.

5. Means of Transportation:
Rivers provide primary channels of inland transportation, not only directly in the form of navigable waterways, but also indirectly through their valleys, where roads, railway lines and other routes are built.

Question 1.
On an outline map of India mark the rivers and lakes of India.
Answer:
(a) The Himalayan River System: The Indus, The Ganga and The Satluj.
(b) The Peninsular River: The Narmada, The Tapi, The Kaveri, The Krishna, The Godavri, The Mahanadi 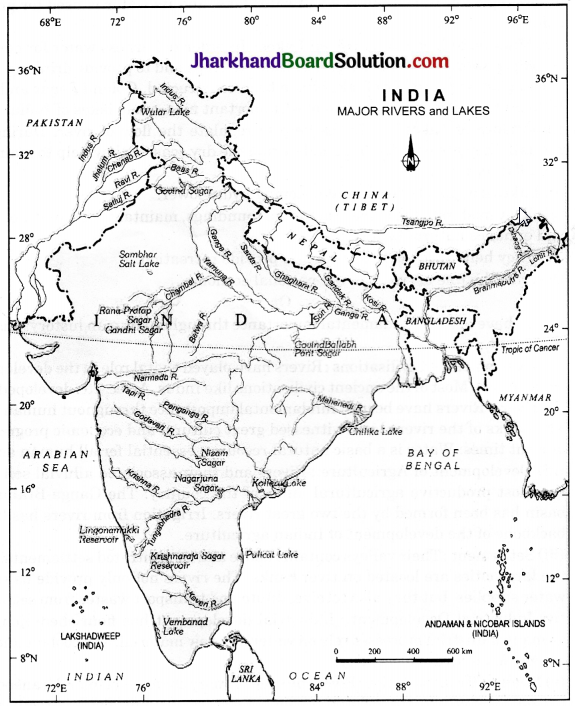