(b) Rigidity: It is the property of matter to resist change in its shape, e.g. solids are rigid.

Question 3.
Give reasons:
(a) A gas fills completely the vessel in which it is kept.
(b) A gas exerts pressure on the walls of the container.
(c) A wooden table should be called a solid.
(d) We can easily move our hand in air but to do the same through a solid block of wood we need a karate expert.
Answer:
(a) The molecules of gases are free to move. Gas molecules have the least amount of attraction between them.Thus, the molecules of gases completely fill the vessel in which they are kept.

Question 4.
Liquids generally have lower density as compared to solids. But you must have observed that ice floats on water. Find out why.
Answer:
Ice is a solid but its density is lower than water due to its structure. The molecules in ice make a cage like structure with lot of vacant spaces. This makes ice float on water.

Question 1.
Why does a desert cooler cool better on a hot dry day?
Answer:
On a hot dry day, there is high temperature and low humidity. Both these factors are responsible for increasing the rate of evaporation. This also means better cooling.

Question 2.
How does the water kept in an earthen pot (matka) become cool during summer?
Answer:
The earthen pot has lots of tiny pores in it. The water oozes out through these pores and gets evaporated at the surface of the pot, by absorbing heat from the water kept in it, thereby causing cooling effect.

Question 3.
Why does our palm feel cold when we put some acetone or petrol or perfume on it?
Answer:
Acetone, petrol and perfume evaporate at low temperatures. When some acetone, petrol, or perfume is dropped on the palm, it takes heat from the palm and evaporates, thereby making the palm cooler.

Question 5.
What type of clothes should we wear in summer?
Answer:
During summer, we should wear cotton clothes because we perspire more to maintain the temperature of our body. Cotton is a good absorber of sweat. It allows the sweat to evaporate faster, thereby giving a cooling effect.

(b) Perfume contains volatile solvent, i.e., gaseous particles, which have high speed and large space between them and diffuse faster and can reach people sitting at a distance.

(b) Iron almirah is solid at room temperature because:

Question 9.
Name the processes A, B, C, D, E and F in the following diagram showing change in state of matter. Increase heat and decrease pressure 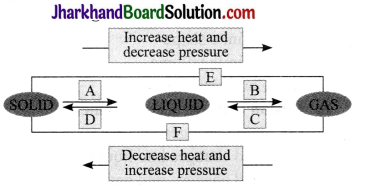