JAC Board Class 8th Social Science Solutions Civics Chapter 3 Why Do We Need A Parliament?

JAC Class 8th Civics Why Do We Need A Parliament? InText Questions and Answers 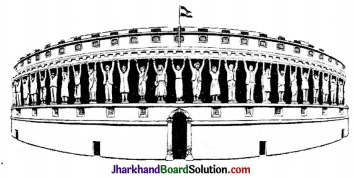 Question 4.
Use the table to answer the questions below: Results of the 16th Lok Sabha Elections, (May 2014) Political Party No. of MPs National Parties

Question 4.
The photograph on page 28 shows results from the 3rd Lok Sabha elections held in 1962. 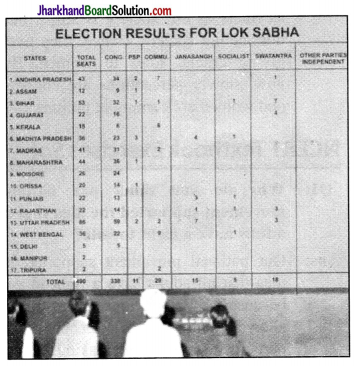 Use the photograph to answer the following questions:
(a) Which state has the highest number of MPs in the Lok Sabha? Why do you think this is so?
(b) Which state has the least number of MPs in the Lok Sabha?
(c) Which political party has won the most seats in all states?
(d) Which party do you think will form the government? Give reasons why.
Answer:
(a) Uttar Pradesh. This state has the largest population as compared to other states.
(b) Manipur.
(c) The Congress Party
(d) The Congress Party will form the government because they have won in majority.

Question 5.
Lok Sabha Unstarred Question uestion No: 48 Answered On: 15.12.2017 Converge of Schemes for Children Manoj Rajoria Will the Minister of Women and Child Development be pleased to state:
(a) whether the Government proposes to converge various schemes and policies for children in the country;
(b) if so, the details thereof; and;
(c) if not, the reasons therefor?
Answer:
Minister of State in the Ministry of Women and Child Development (Dr. Virendra Kumar). (a) to (c) The Ministry has developed the National Plan of Action for Children 2016 which largely draws upon the existing programmes and schemes of various Ministries/Departments.

It provides a framework for convergence and co-ordination between Ministries/Departments and State/ UTs Governments and encourages collective action from all stakeholders to address multi dimensional vulnerabilities experienced by children. The National Plan of Action for Children 2016 categorizes children’s rights under four key priority areas.

(i) Survival, Health and Nutrition,

If I were a MP, then I would have asked the following questions:

Question 7.
Why do you think there are so few women in Parliament? Discuss.
Answer:
People don’t want to accept women as rulers as our society is still a male dominating society. Hence, they avoid giving crucial roles to women. But, now, slowly perceptions are changing and women are coming in politics

JAC Class 8th Civics Why Do We Need A Parliament? Textbook Questions and Answers

Question 2.
In this 2004 map of Parliamentary constituencies alongside, roughly identify the constituencies in your State. What is the name of the MP from your constituency? How many MPs does your state have? Why are certain constituencies coloured green while others are coloured blue? 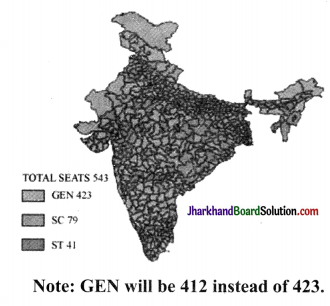 Question 3.
You have read in Chapter 1 that the ‘Parliamentary form of government’ that exists in India has three tiers. This includes the Parliament (centra! government) and the various Sta Legislatures (state governments). Fill in the following table with information on the various representatives from your area:

Answer:
Students need to do it on their own with the help of teacher.

JAC Class 8th Civics The Why Do We Need A Parliament? Important Questions and Answers

Question 10.
The seats are reserved in Parliament for…….
(a) the people from the army
(b) the royal family members
(c) SCs and STs
(d) both a and c
Answer:
(c) SCs and STs

Question 1.
What do you mean by EVM?
Answer:
EVM means Electronic Voting Machine.

Question 5.
What do you mean by constituency?
Answer:
Constituency is an area whose voters elect a representative to a legislative body.

Question 6.
What is the main purpose of parliament?
Answer:
Parliament enables citizens of India to participate in decision making and control the government.

Question 7.
Who presides over Lok Sabha?
Answer:
Lok Sabha (House of the People), with a total membership of 545, is presided over by the Speaker.

Question 10
Who makes the opposition party?
Answer:
The opposition in Parliament is formed by all the political parties that oppose the majority party/coalition formed. The largest amongst these parties is called the Opposition

Question 3.
What is the role of opposition in’ democracy?
Answer:
The opposition parties play a crucial and important role in the healthy functioning of a democracy. They highlight drawbacks in various policies and programmes of the government and mobilise popular support for their own policies.

Question 6.
What are the main components of Indian Parliament?
Answer:
The Parliament of India is the supreme legislative body of the Republic of India. It is a two chambered legislature composed of the President of India and the two houses- the Rajya Sabha (Council of States) and the Lok Sabha (House of the People).

Question 1.
How the political party forms the government? How are the representatives elected to the Parliament in India?
Answer:
After the Lok Sabha elections, a list is prepared showing how many MPs belong to each political party. For a political party to form the government, they must have a majority of elected MPs. Since there are 543 elected (plus 2 Anglo-Indian nominated) members in Lok Sabha and to have a majority a party should have at least half the number, i.e., 272 members or more. The Parliament in our system has immense powers because it is the representative of the people.

JAC Board Class 8th Social Science Notes Civics Chapter 3 Why Do We Need A Parliament?

→ The Parliament enables citizens of India to participate in decision making and control the government, thus making it the most important symbol of Indian democracy and a key feature of the Constitution.

→ Why should People Decide?

→ People and their Representatives

→ The Role of the Parliament

→ To Select the National Government

→ To Control, Guide and Inform the Government

→ Law-Making
Law-making is a significant function of Parliament.

→ Who are the People in Parliament?