Question 1.
Complete the table to show how sectors are dependent on each other.  Examples of Economic Activities

Question 2.
Explain the difference between primary, secondary and tertiary sectors using examples other than those mentioned in the text.
Answer:

Question 3.
Classify the following list of occupations under primary, secondary and tertiary sectors:

Question 4.
Students in a school are often classified into primary and secondary or junior and senior. What is the criterion that is used? Do you think this is a useful classification? Discuss.
Answer:
The above mentioned classification is on the basis of the class of the student in which they study. Yes, this is a useful and easy classification to categorize/group students/children. The total number of students in each primary or secondary wing in comparison to the total number of children highlights the literacy level of a country, state or an area.

Question 5.
What does the history of developed countries indicate about the shifts that have taken place between sectors?
Answer:
The history of developed countries indicates that at initial stages of development, primary sector was the most important sector of economic activity. With changing time and with new methods of manufacturing many factories came up. Those working in farms began to work in factories in large numbers. Secondary sector eventually became the most important in total production and  employment. In the last 100 years there has been a further shift from the secondary sector to the tertiary sector. The service sector has become the most important sector in terms of total production of the economy.

Question 6.
Correct and arrange the important aspects for calculating GDP from this Jumble. “To count goods and services we add the numbers that are produced. We count all those that were produced in the last five years. Since we shouldn’t leave out anything we add up all these goods and services.”
Answer:
We count the value of final goods and services produced in a country during a particular year. The sum of production in the three sectors is called the Gross Domestic Product (GDP) of a country.

Question 7.
Answer the following questions by looking at the graph:
Answer:
Graph 1: GDP by Primary, Secondary and Tertiary Sectors 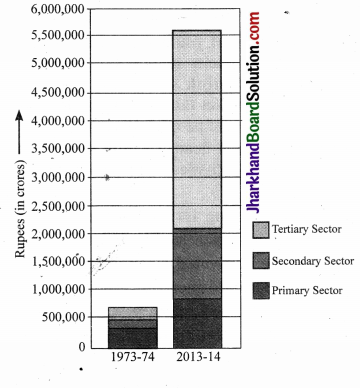 Question 12.
Complete the following table using the data given in Graphs 2 and 3 and answer the question that follows.
Graph 2: share of sectors in GDP% 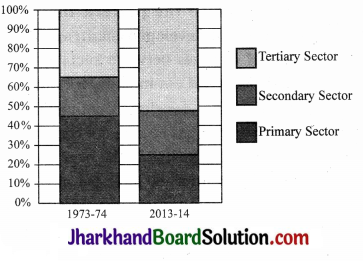 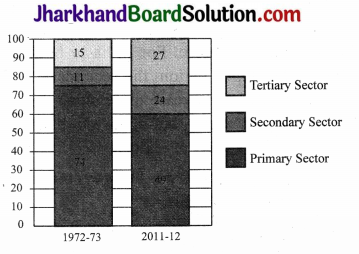 Question 1.
Share of Primary Sector in GDP and Employment

What are the changes that you observe in the primary sector over a span of forty years?
Answer:
In the span of 40 years the contribution of primary sector in GDP has majorly declined from 40% to 12%, where as its share in employment has declined by a margin from 74% to around 49%.

Question 13.
Compare and contrast the changes in India with the pattern that was observed for developed countries. What kind of changes between sectors were desired but did not happen in India?
Answer:
In India, like developed countries the primary sector has been major contributor in the country’s GDP in the beginning as can be seen from the table but now both the secondary and tertiary sectors are. increasing at the expense of the primary sector, though the increase in tertiary sector is more. For India to become a developed nation, the secondary sector needed to increase more along with the tertiary sector, but this is not happening due to variety of reasons.

Question 17.
How would income and employment increase if farmers were provided with irrigation and marketing facilities?
Answer:

Question 21.
The table below shows the estimated number of workers in India in the or – ganized and unorganized sectors. Read the table carefully. Fill in the missing data and answer the questions that follow. Workers in Different Sectors (In Millions)

(a) Assuming all people in the primary sector in the unorganized sector work in agriculture, it is estimated to be 99 %.

Question 1.
Fill in the blanks using the correct option given in the bracket:
(i) Employment in the service sector ………… increased to the same extent as production. (has / has not)
Answer:
has not

(ii) Workers in the sector do not produce goods. (tertiary / agricultural)
Answer:
tertiary

(iii) Most of the workers in the ……….. sector enjoy job security, (organised / unorganised)
Answer:
organized

(iv) A ……….. proportion of labourers in Tndia are working in the unorganised sector. (large / small)
Answer:
large

(ii) Production of a commodity, mostly through the natural process, is an activity in ………… sector.
(a) primary
(b) secondary
(c) tertiary
(d) information technology
Answer:
(a) primary

Question 5.
A research scholar looked at the working people in the city of Surat and found the following.

Complete the table. What is the percentage of workers in the unorganised sector in this city?
Answer:

70% workers are in unorganized sector in this city.

Question 6.
Do you think the classification of economic activities into primary, secondary and tertiary is useful? Explain how.
Answer:

Question 7.
For each of the sectors that we came across in this chapter why should one focus on employment and GDP? Could there be other issues which should be examined? Discuss.
Answer:

Question 8.
Make a long list of all kinds of work that you find adults around you doing for a living. In what way can you classify them? Explain your choice.
Answer:

The nature of work can be classified on the basis of sector and nature of activity such as primary, secondary and tertiary. This classification provides information about percentage of employment in each sector.

Question 9.
How is the tertiary sector different from other sectors? Illustrate with a few examples.
Answer:

Question 10.
What do you understand by disguised unemployment? Explain with an example each from the urban and rural areas.
Answer:

Question 12.
“Tertiary sector is not playing any significant role in the development of Indian economy.” Do you agree? Give reasons in support of your answer.
Answer:

2. Unorganized:
The unorganized sector on the other hand includes enterprises those are not registered by the government. The unorganized sector is characterized by small and scattered units which do not follow rules for employment. No benefits are given to the workers. There is no job security or assurance of work. People working in unorganized sector do not get paid weekly offs or holidays. For example, there are casual construction workers, casual helpers in garages or shops etc.

Question 16.
Compare the employment conditions prevailing in the organized and unorganized sectors.
Answer:

Question 17.
Explain the objective of implementing the NREGA 2005.
Answer:
It is called National Rural Employment Guarantee Act 2005 (MGNREGA 2005). Its main objectives are to provide livelihood to all. Those who are able to, and are in need of, work have been guaranteed 100 days of employment in a year by the government. If the government fails in its duty to provide employment, it will give unemployment allowances to the people.

Question 19.
Discuss and fill the following table giving one example each from your area.

Question 20.
Give a few examples of public sector activities and explain why the government has taken them up.
Answer:

More employment can be generated by some of the following ways such as:

Question 24.
The following table gives the GDP in Rupees (Crores) by the three sectors:

(i) Calculate the share of the three sectors in GDP 2000 and 2013.
(ii) Show the data as a bar diagram similar to Graph 2 in the chapter.
(iii) What conclusions can we draw from the bar graph?
Answer: 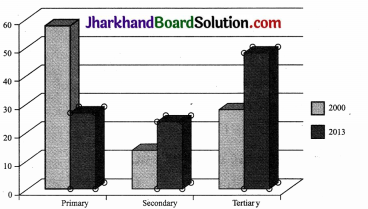 (iii) We can draw following conclusion looking at the bar diagram such as the graph shows GDP of primary sector has decreased in 13 years from 2000 to 2013.

This indicates the economy moving away from developing towards developed economy with secondary and tertiary sector getting stronger.

Question 2.
Which organization in India conducts the employment and unemployment survey every five years?
(a) Census of India
(b) NSSO
(c) Economic Survey
(d) None of the above
(d) None of these
Answer:
(b) NSSO

Question 7.
Through which shops Government of India sells wheat and rice at lower rate to consumers?
(a) Ration shops
(b) Departmental stores
(e) Kirana store
(d) Fair price shop
(d) None of these
Answer:
(a) Ration shops

Question 10.
Which sector contributed maximum in India’s GDP in 2003?
(a) Primary
(b) Secondary
(c) Tertiary
(d) None of these
Answer:
(c) Tertiary

Question 1.
Define Economy.
Answer:
Economy is related with the production, consumption and distribution pattern of goods and services in a region. It shows the status of the region.

Question 3.
Give one example each of primary, secondary and tertiary activities.
Answer:

Question 4.
Define secondary sector activity.
Answer:
Secondary sector includes those activities in which natural products are transformed into other products by ways of manufacturing.

Question 5.
What Is tertiary sector?
Answer:
Tertiary sector activities do not involve direct production of goods like the other two sectors, but these activities support the primary and secondary sector to develop.

Question 6.
Define GDP.
Answer:
Gross Domestic Product is the final value of goods and services produced in all of the three sectors in a year.

Question 7.
Who calculates GDP in India?
Answer:
The mammoth task of calculating GDP in India is done by Central government ministry.

Question 10.
When was NREGA launched?
Answer:
NREGA was launched in the year 2005 in India.

Question 1.
Define public sector and what Is its purpose?
Answer:

Question 2.
Why the value of final goods and services Is counted in calculating GDP?
Answer:

Question 6.
Define private sector and its purpose.
Answer:
Privatesectorincludesthoseorganizations, which are owned, controlled and managed by private companies or individuals or a family. Such as Reliance Industries, Bajaj Motors etc. The main purpose of these organizations is to earn profit.

Question 4.
Which are the people who need protection in unorganised sector?
Or
Suggest ways to protect the workers in the unorganized sector.
Answer:

Question 1.
The following table gives the GDP in Rupees (Crores) by the three sectors:

The data shows that the contribution of primary sector in GDP has decreased over the past 50 years.