Question 1.
A homogenous naturally occurring substance with a definable interior structure is called?
(a) Minerals
(b) Iron ore
(c) Diamond
(d) None
Answer:
(a) Minerals

Question 3.
Which one of the following is a non- metallic mineral?
(a) Copper
(b) Iron ore
(c) Limestone
(d) None
Answer:
(a) Copper

Question 4.
Which of the following metallic minerals is obtained from veins and lodes?
(a) Zinc
(b) Limestone
(c) Rutile
(d) Mica
Answer:
(a) Zinc

Question 5.
Which of the following minerals is formed as a result of evaporation in the arid regions?
(a) Gypsum
(b) Zinc
(c) Coal
(d) Copper
Answer:
(a) Gypsum

Question 1.
What is an ore?
Answer:
The term ore is used to describe an accumulation of any mineral mixed with other elements. Minerals are usually found in “ores”.

Question 3.
Name some minerals formed in beds and layers.
Answer:
Coal and some forms of iron ore, gypsum

Question 8.
“Hydel power is more important source of energy than thermal power.” Discuss this fact with four examples?
Answer:
Hydel power is a renewable source as it is produced from water moving with a great speed. On the other hand coal, petroleum and natural gas are non-renewable. Hydel power is neat and clean and pollution free with less maintenance cost. It is transported easily through wires.

Question 1.
Elaborate the main types of formations in which minerals occur.
Answer:
Minerals generally occur in the following forms:
(i) In igneous and metamorphic rocks minerals occur in the cracks, crevices, faults or joints. The smaller occurrences are called veins and the larger are called lodes. Mostly, they are formed when minerals in liquid/molten and gaseous forms are forced upward through cavities towards the earth’s surface. They cool and solidify as they rise. Major metallic minerals like tin, copper, zinc and lead, etc. are obtained from veins and lodes.

(iii) Another mode of formation involves the decomposition of surface rocks, and the removal of soluble constituents, leaving a residual mass of weathered material containing ores. Bauxite is formed this way.

(iv) Some minerals occur as alluvial deposits in sands of valley floors and the base of hills. These deposits are called ‘placer deposits’ and generally contain minerals, which are not corroded by water. Gold, silver, tin and platinum are most important among such minerals.

(v) The ocean waters contain vast quantities of minerals, but most of these are too widely diffused to be of economic significance. However, common salt, magnesium and bromine are largely derived from ocean waters. The ocean beds, too, are rich in manganese nodules.

Question 2.
Describe distribution, production and reserves of iron ore in India.
Answer:
Iron ore is the basic mineral and the backbone of industrial development. India is rich in good quality iron ores. Magnetite is the finest iron ore with a veiy high content of iron up to 70 per cent followed by haematite ore which contains 50 to 60 per cent. Odisha, Chattisgarh and Jharkhand produce about 75% of the total production of iron ore in India. The major iron ore belts in India are:

(i) Odisha-Jharkhand belt:
In Odisha high grade haematite ore is found in Badampahar mines in the Mayurbhanj and Kendujhar districts. In the adjoining Singhbhum district of Jharkhand haematite iron ore is mined in Gua and Noamundi.

(iii) Ballari-Chitradurga-Chikkamagaluru- Tumakuru belt:
This belt in Karnataka has large reserves of iron ore. Kudremukh deposits are known to be one of the largest in the world. The Kudremukh mines located in the Western Ghats of Karnataka are a 100 per cent export unit.

(iv) Maharashtra-Goa belt:
This belt includes the state of Goa and Ratnagiri district of Maharashtra. Though, the ores are not of very high quality, yet they are efficiently exploited. Iron ore is exported through Marmagao port.

Question 3.
Why conservation of mineral resources is necessary? Explain any three methods to conserve them.
Answer:
Mineral resources are, finite and non-renewable. Minerals are important for the development of a country. We are rapidly consuming mineral resources that require millions of years to be created and concentrated. The geological processes of mineral formation are so slow that the rates of replenishment are infinitely small in’comparison to the present rates of consumption.

Three methods for conserving minerals are:

Question 4.
Describe different types of coal with their distribution.
Answer:Coal is of different types, varying according to the amount of carbon content. They can be classified as:

Question 5.
Describe in detail the types of non- conventional sources of energy.
Answer:
Non-conventional energy or Renewable energy is generally defined as energy that comes from resources which are naturally replenished on a human time scale such as sunlight, wind, rain, tides, waves and geothermal heat. These sources include the following:

(i) Wind energy:
Wind turbines are the most popular structures that are used to convert the speed of wind into usable electricity. They can be found on land, usually near the coast in areas where there is a constant strong wind, or in the ocean. The largest wind farm cluster is located in Tamil Nadu from Nagercoil to Madurai. Apart from these, Andhra Pradesh, Karnataka, Gujarat, Kerala, Maharashtra and Lakshadweep have important wind farms. Nagarcoil and Jaisalmer are well . known for effective use of wind energy in the country.

(ii) Solar energy:
Solar power, has been around for some time now. Photovoltaic technology convert sunlight into electricity. Solar energy is fast becoming popular in rural and remote areas. Some big solar power plants are being established in different parts of India which will minimise the dependence of rural households on firewood and dung cakes, which will contribute to environmental conservation and adequate supply of manure in agriculture.

(iii) Tidal energy:
Oceanic tides can be used to generate electricity. Floodgate dams are built across inlets. During high tide water flows into the inlet and gets trapped when the gate is closed. After the tide falls outside the flood gate, the water retained by the floodgate flows back to the sea via a pipe that carries it through a power-generating turbine. In India, the Gulf of Khambhat, the Gulf of Kachchh in Gujarat on the western coast and the Gangetic delta in the Sunderban regions of West Bengal provide ideal conditions for utilizing tidal energy.

(iv) Nuclear energy:
It is obtained by altering the structure of atoms. When such an alteration is made, much energy is released in the form of heat and this is .used tp’generate electric power. Uranium and thorium are available in Jharkhand and the Aravalli ranges of Rajasthan are used to generate atomic or nuclear power. The Monazite sands of Kerala are also rich’in thorium. 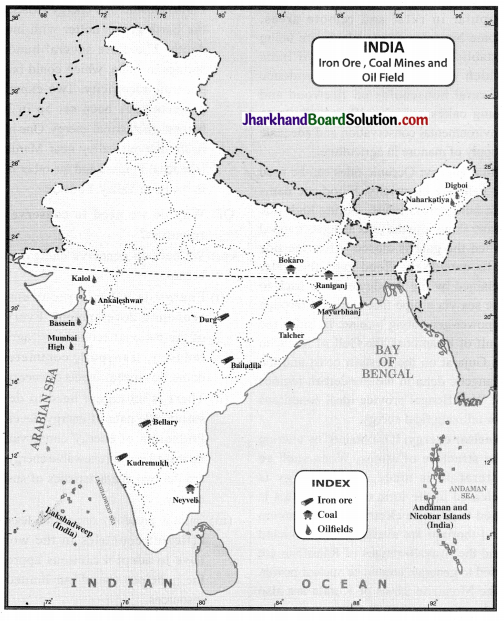 Question 1.
Locate and label the following Thermal and Nuclear Plants.
(a) Thermal Question 2.
Collect “Nutritional Facts” printed on food labels.
Answer:
Do it yourself activity. Sample answer is given.A sample of nutritional facts printed on a packet of glucose biscuits is given below:

Question 5.
Locate the mines of bauxite on the physical map of India.
Answer:
Do it yourself.

Question 8.
Collect information about thermal/ hydel power plants located in your state. Show them on the map of India.
Answer:
Do it yourself.

Question 9.
Collect information about newly established solar power plants in India.
Answer:
India is now home to world’s largest solar plant on a ‘single location’. The plant, in Kamuthi, Tamil Nadu, comes with a capacity of 648 MW and covers an area of 10 sq m/km. It also bears the capacity of charging its own solar panels. Furthermore, when in full swing, the plant is capable of producing electricity for 150,000 homes.

The cost of this project was ‘ 46,535,570,550. With this, India’s total installed capacity of solar plants has nudged across the 10 GW mark. Thus, India will be the world’s third-biggest solar market from next year onwards, after China and the US. However, we are still lagging a bit in regard to the expectations that the government has set for the nation.

Question 10.
Locate the 6 nuclear power stations and find out the state in which they are located.
Answer:

Question 1.
Choose the right answer from the four alternatives given below.
(i) Which one of the following minerals is formed by decomposition of rocks, leaving a residual mass of weathered material?
(a) Coal
(b) Bauxite
(c) Gold
(d) Zinc
Answer:
(a) Coal

(ii) Koderma, in Jharkhand is the leading producer of which one of the following minerals?
(a) Bauxite
(b) Mica
(c) Iron ore
(d) Copper
Answer:
(b) Mica

(iv) Which one of the following minerals is contained in the Monazite sand?
(a) Oil
(b) Ur0anium
(c) Thorium
(d) Coal
Answer:
(c) Thorium

(b) What is a mineral?
(c) How are minerals formed in igneous and metamorphic rocks?
(d) Why do we need to conserve mineral resources?

(b) A mineral is a naturally occurring homogeneous substance with a definable interior structure. Mineral that will be formed from a certain combination of elements depends upon the physical and chemical conditions under which the material forms.

(c) In igneous and metamorphic rocks minerals may occur in the cracks, crevices, faults or joints. The smaller occurrences are called veins and the larger are called lodes. In most cases, they are formed when minerals in liquid/molten and gaseous forms are forced upward through cavities towards the earth’s surface. They cool and solidify as they rise.

(d) We are rapidly consuming mineral resources that require millions of years to be created and concentrated. The geological processes of mineral formation are so slow that the rates of replenishment are infinitely small in comparison to the present rates of consumption. Mineral resources are, therefore, finite and non¬renewable. That is why we need to conserve mineral resources and use them wisely.

Question 3.
Answer the following questions in about 120 words.
(a) Describe the distribution of coal in India.
(b) Why do you think that solar energy has a bright future in India?
Answer:
(a) In India, coal is the most abundantly available fossil fuel. It provides a substantial part of the nation’s energy needs.

(i) In India, coal occurs in rock series of two main geological ages, viz., Gondwana, a little over 200 million years in age and in tertiary deposits which are only about 55 million years old. The major resources of Gondwana coal, which are metallurgical coal, are located in Damodar valley (West Bengal-Jharkhand). The important coal fields are Jharia, Raniganj and Bokaro. The Godavari, Mahanadi, Son and Wardha valleys also contain coal deposits.

(iii) Lignite is a low grade brown coal, which is soft with high moisture content. The principal lignite reserves are in Neyveli in Tamil Nadu and are used for generation of electricity.

Distribution of coal in India:

(b) India has enormous possibilities of tapping solar energy. Photovoltaic technology converts sunlight directly into electricity. Solar energy is fast becoming popular in rural and remote areas. Some big solar power plants are being established in different parts of India which will minimise the dependence of rural households on firewood and dung cakes, which in turn will contribute to environmental conservation and adequate supply of manure in agriculture.

Question 1.
Fill the name of the correct mineral in the crossword below: