Question 2.
Find out how grain is transported from villages to cities at present. In what ways is this similar to or different from the ways in which the Banjaras functioned?
Answer:
At present, grains are transported from villages to cities in trucks, trains, etc. The present-day method of transportation is much faster than the method of Banjaras who used bullock- carts for grain transportation.

Question 5.
Imagine, you are a member of a nomadic community that shifts residence every three months. How w ould this change your life?
Answer:
Think due to nomadic life, my education would be highly disturbed otherwise I would have to live in a hostel. That would result in the separation of the family. I would get a chance to see my new places, to go through unknown, unexplored forests. Therefore, my life would be changed in both positive and negative manners.

Question 2.
Fill in the blanks:
(a) The new castes emerging within varnas were called………
(b) ……… were historical works written by the Ahoms.
(c) The …….. mentions that Garha Katanga had 70,000 villages.
(d) As tribal states became bigger and stronger, they gave land grants to…….. and
Answer:
(a) Jatis
(b) Buranjis
(c) Akbar Nama
(d) poets, scholars

Question 3.
State ‘T’ for true and ‘F’ for false.
(a) Tribal societies had rich oral traditions.
(b) There were no tribal communities in the north western part of the subcontinent.
(c) The chaurasi in Gond states contained several cities.
(d) The Bhils lived in the north-eastern part of the subcontinent.
Answer:
(a) True
(b) False
(c) False
(d) False

Question 8.
Were the Banjaras important for the economy?
Answer:
The Banjaras were the most important trader nomads. The caravan of the banjaras was called tanda. Sultan Alauddin Khalji used the Banjaras to transport grain to the city markets. They carried grain on their bullocks from different areas and sold it in towns. They transported food grain for the Mughal army during military campaigns. They bought grains where it was cheaply available and carried it to places where it is dearer and .later, again reloaded their oxen with anything that can be profitably sold in other places.

Question 10.
Plot the location of the tribes mentioned in this chapter on a map. For any two, discuss whether their mode of livelihood was suited to the geography and the environment of the area where they lived.
Answer:
Many tribes lived in different parts of India. See the map given below 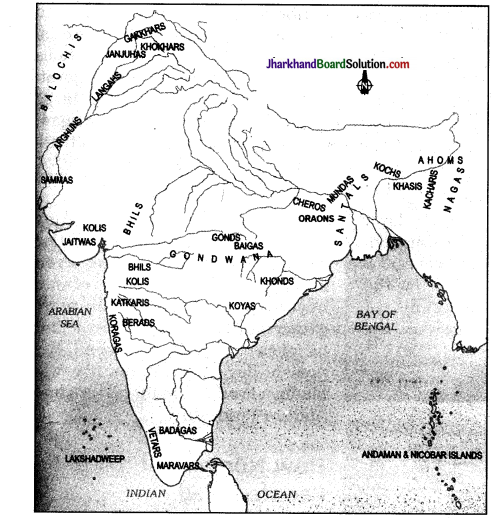 Question 12.
Find out more about present-day nomadic pastoral groups in the subcontinent. What animals do they keep? Which are the areas frequented by these groups?
Answer:
Present-day nomadic pastoral groups in the sub-continent are Gaddi shepherds living in the western Himalayas, Gujjar-Bakarwals, living in Jammu & Kashmir, Banjaras living in Rajasthan. These nomadic people keep sheep, goats, camels, horses and cows. They frequently visit Kumaon region of Uttarakhand, Jammu & Kashmir and Rajasthan.

Question 1.
The most important tribe in the later years of Punjab
(a) Gonda
(b) Gakkhars
(c) Khokhar
(d) Langahs
Answer:
(b) Gakkhars

Question 4.
What do you understand by tribes?
Answer:
The societies which did not followed the social rules and rituals prescribed by the Brahmanas nor divided into many classes are called as tribes.

Question 9.
What do you mean by tandal
Answer:
The most important trader nomads were the Banjaras. Their caravan was called tanda.

Question 10.
Who defeated the Cheros?
Answer:
Mughal forces under Aurangzeb captured many Chero fortresses and defeated the tribe.

Question 1.
What do you mean by paiksl To which region they belong to?
Answer:
The Ahoms depended upon the forced labour and those who were forced to work for the state were called paiks. They belonged to Ahom state.

Question 2.
What do you mean by itinerant groups?
Answer:
Itinerant groups, such as craftspersons, pedlars and entertainers travel from place to place practising their different occupations.

Question 4.
Describe in brief the term ‘khel’ in context to Ahom society.
Answer:
Ahom society was divided into clans or khels. Artisans in the Ahom areas came from the adjoining kingdoms as there were very few castes of artisans. A khel often controlled many villages. The peasant was given land by his village community. Even the king could not take it away without the community’s consent.

Question 5.
Banjaras were used by Sultan Alauddin Khilji and the Mughals. How?
Answer:
To transport grains to the city markets, Sultan Alauddin Khilji used the Banjaras. The Banjaras under the Mughals carried grains on their bullocks from different areas and sold it in towns. They also transported food grains to Mughal army during military campaigns.

Question 6.
In what way the present day historians use to write tribal histories?
Answer:
Contemporary historians and travellers give very less information about tribes. A few exceptions apart, mostly tribal people did not keep written records but they preserved rich customs and oral and verbal traditions. These were passed down to each new generation. Present day historians have started using such oral and verbal traditions to write tribal histories.

Question 7.
Who were Ahoms and how did they managed to build a large state?
Answer:
In .the thirteenth century, the Ahoms relocated to the Brahmaputra valley from present-day Myanmar. They created a new state by overpowering the older political system of the bhuiyans which means landlords. During the sixteenth century, they annexed the kingdoms of the Chhutiyas (1523) and of Koch-Hajo (1581) and defeated many other tribes.

Question 9.
Briefly discuss how did the tribes earn their livelihood.
Answer:
Agriculture was the main source of livelihood of many tribes. Some were hunter-gatherers or herders. Most of the time they combined these activities to make full use of the natural resources of the area in which they lived. Some of the tribes were nomadic and moved from one place to another. A tribal group controlled land and pastures jointly and divided these amongst households according to its own rules.

→ Society was divided according to the rules of varna in most parts of the subcontinent. These rules were prescribed by the Brahmanas and were accepted by the rulers of large kingdoms. The difference between the rich and poor increased.

→ Who were Tribal People?

→ How Nomads and Mobile People Lived?

→ A Closer Look The Gonds