Students should go through these JAC Class 9 Maths Notes Chapter 14 Statistics will seemingly help to get a clear insight into all the important concepts.

Introduction:
The branch of science known as Statistics has been used in India from ancient times. Statistics deals with collection of numerical facts ie, data, their classification and tabulation and their interpretation. In statistics we shall try to study, in detail about collection, classification and tabulation of such data.
→ Importance of Data: Expressing facts with the helps of data is of great importance in our day-to-day life. For example, instead of saying that India has a large population it is more appropriate to say that the population of India, based on the census of 2001 is more than one billion.

→ Collection of Data: On the basis of methods of collection, data can be divided into two categories:
(i) Primary data: Data which are collected for the first time by the statistical investigator or with help of his workers is called primary data. For example if an investigator wants to study the condition of the workers working in a factory then for this he collects some data like their monthly income, expenditure, number of brothers, sisters, etc.

(ii) Secondary data: Data already collected by a person or a society and may be available in published or unpublished form is known as secondary data. Secondary should be carefully used. Such data is generally obtained from the following two sources.

(iv) Quantitative basis: If facts are such that they can be measured physically e.g, marks obtained, height, weight, age, income, expenditure etc, such facts are known as variable values. If such facts are kept into classes then it is called classification according to quantitative or class intervals.

Definitions:
→ Variate: The numerical quantity whose value varies is called a variate, generally a variate is represented by x. There are two types of variate.
(i) Discrete variate: Its magnitude is fixed. For example, the number of teachers in different branches of a institute are 30, 35, 40 etc.
(ii) Continuous variate: Its magnitude is not fixed. It is expressed in groups like 10 – 20, 20 – 30, … etc.
→ Range: The difference between the maximum and the minimum values of the variable x is called range.
→ Class frequency: in each class, the number of times a data is repeated is known as its class frequency.
→ Class limits: The lowest and the highest value of the class are known as lower and upper limits respectively of that class.
→ Classmark: The average of the lower and the upper limits of a class is called the mid value or the class mark of that class. It is generally denoted by x.
If x is the mid value and his the class size, then the class limits are \(\left(x-\frac{h}{2}, x+\frac{h}{2}\right)\). Frequency Distribution:
The marks scored by 30 students of IX class of a school in the first test of Mathematics out of 50 marks are as follows:

The number of times a mark is repeated is called its frequency. It is denoted by f. Example:
Total marks obtained by 10 students in a class.

(ii) Inclusive series: In this method value of upper and lower limit are both contained in same class. In this method the upper limit of class and lower limit of next class are not same. Some time the value is not a whole number, it is a fraction or in decimals and lies in between the two intervals then in such situation the class interval can be constructed as follows:

(i) Bar Graphs. A bar graph is a graph that present categorical data with rectangular bars with heights or lengths proportional to the values that they represent.

Example:
A family with monthly income of ₹ 20,000 had planned the following expenditure per month under various heads: Draw bar graph for the data giyen below: 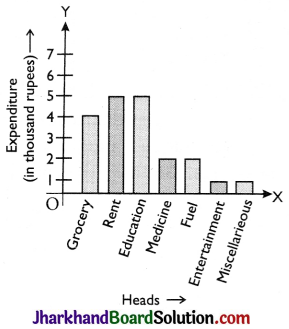 (ii) Histogram: Histogram is rectangular representation of grouped and continuous frequency distribution in which class intervals are taken as base and height of rectangles are proportional to corresponding frequencies.

Now we shall study construction of histo grams related with four different kinds of frequency distributions.

Now we try to make the above facts clear with some examples.

Example:
Draw a histogram of the following frequency distribution. Example:
The weekly wages of workers of a factory are given in the following table. Draw histogram for it.

Solution:
Here frequency distribution is grouped and continuous but class intervals are not same. Under such circumstances the following method is used to find heights of rectangle so that heights are proportional to frequencies the least.
(i) Write the least class size (h), here h = 500.
(ii) Redefine the frequencies of classes by using following formula.
Redefined frequency of class = \(\frac{\mathrm{h}}{\text { class size }}\) × frequency of class interval.
So, here the redefined frequency table is obtained as follows:

This is the required histogram of the given frequency distribution.

(a) Difference between Bar Graph and Histogram

Following procedure is useful to draw a frequency polygon with the help of histogram.

Example:
For the following frequency distribution, draw a histogram and construct a frequency polygon with it.

Solution:
The given frequency distribution is grouped and continuous, so we construct a histogram by the method given earlier Join the middle points P, Q, R, S, T of upper horizontal line of each rectangles A, B, C, D, E by straight lines. Solution:
Given frequency distribution is grouped and continuous. So we construct a histogram by using earlier method. Join the middle points P, Q, R, S, T, U, V, W, X, Y of upper horizontal lines of each rectangle A, B, C, D, E, F, G, H, I, J by straight line in successions. Example:
Draw a frequency polygon of the following frequency distribution.

Solution:
Here frequency distribution is grouped and continuous so here we obtain following table on the basis of class. Measures Of Central Tendency:
The commonly used measure of central tendency are:
(a) Mean,
(b) Median,
(c) Mode

i.e. product of mean and no. of items gives sum of observations. (ii) Uses of Median:
(A) Median is the only average to be used while dealing with qualitative data which cannot be measured quantitatively but can be arranged in ascending or descending order of magnitude.
(B) It is used for determining the typical value in problems concerning wages, distribution of wealth etc.

(c) Mode:
(i) Mode of ungrouped data (By inspection only): Arrange the data in an array and then count the frequencies of each variate. The variate having maximum frequency is the mode.

∴ Mode is 12
(ii) Uses of Mode: Mode is the average to be used to find the ideal size, e.g., in business forecasting, in manufacture of ready-made garments, shoes etc.

Empirical Relation Between Mode, Median And Mean:
Mode = 3 Median – 2 Mean
Range:
The range is the difference between the highest and lowest scores of a distribution. It is the simplest measure of dispersion. It gives a rough idea of dispersion. This measure is useful for ungrouped data.
(a) Coefficient of the Range:
If R and h are the lowest and highest scores in a distribution then the coefficient of the Range = \(\frac{\mathrm{h}-\mathrm{R}}{\mathrm{h}+\mathrm{R}}\)